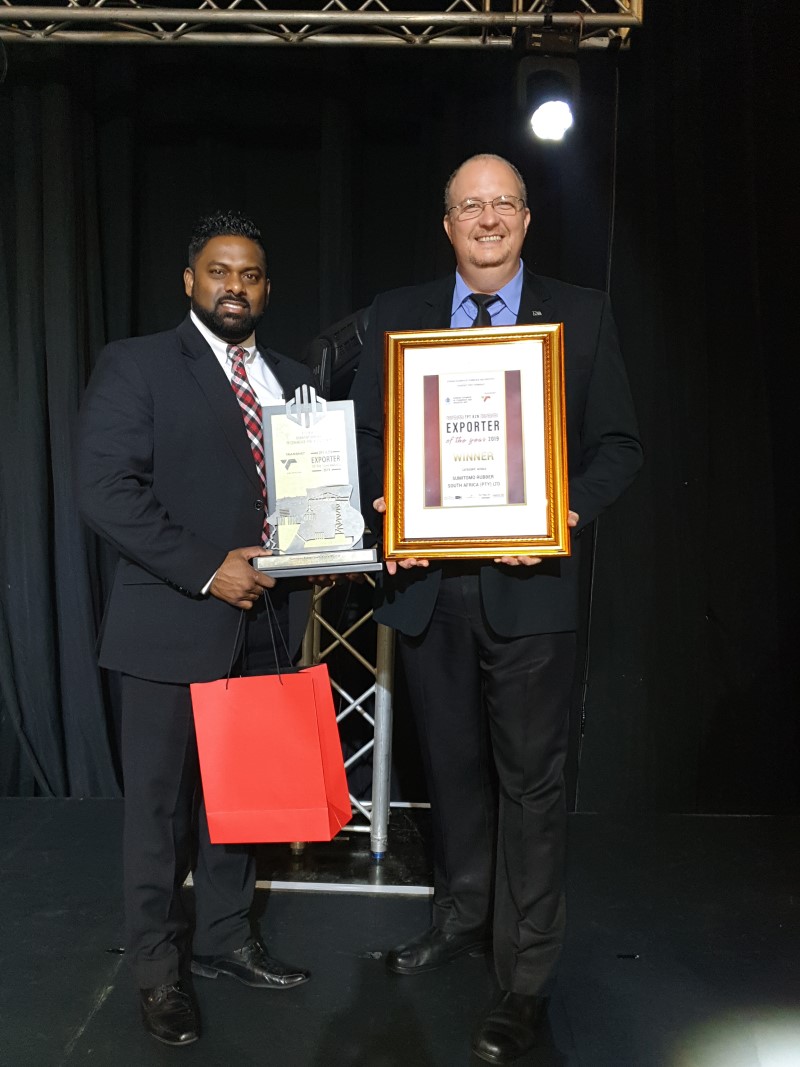 Sumitomo Rubber South Africa (Pty) Ltd bagged the KZN Exporter of the Year Award for the second consecutive year. The company received the award at a prestigious event that was held at the Inkosi Albert Luthuli International Convention Centre in Durban. The tire company which is based in KwaZulu-Nataland is better known as Sumitomo Dunlop received the KZN Exporter of the Year 2019 award in the Africa category.

Commenting on the award, Riaz Haffejee, CEO of Sumitomo Rubber South Africa said that this year ahs been a challenging one for Sumitomo Dunlop thanks to tough economic conditions in the domestic market for the third straight year and high levels of investment to upgrade the factory in order to increase production. Hence, the export market has become really important to the company. 2019 also happens to be the year that the company celebrated years of the Dunlop brand. He added that the award further highlighted the fact that the company is well on track to become the top tire manufacturer in Africa.

Sumitomo Dunlop currently exports tires to 48 countries in Africa and has a retail network which is expanding at a fast rate with close to 500 branded franchise stores. These stores meet the tire fitment needs of consumers and commercial fleet owners and provide them with access to safe, quality tires.

The company has continued to invest in the local economy by creating jobs in the region while ramping up tire production and its export capacity. It has spent a significant amount on upgrading the existing factory for production of Ladysmith passenger car, SUV/4X4 and light truck tires. It further expanded its activities by setting up a world-class, custom built truck and bus radial tire factory sprawling over 180,000 square meters thus foraying into a key sector.

Haffejee concluded by saying that Africa offered immense potential for expansion and investment. He said, “Sumitomo Dunlop continues to invest in innovative technologies, research and development to ensure that we continue to deliver quality tyre products to the market, prioritising safety on the roads.”

Both the general public and industry stakeholders have recognized the company’s commitment to economic growth, skills development and safety. At the maiden KZN Investor Awards in September, Sumitomo Dunlop won the KZN Investor 2019 Award as well as the Most Impactful Investor and Major Capital Investor Awards. The Dunlop brand was again chosen as the top tire brand by consumers in the 2019/2020 Ask Afrika TGI Survey – the seventh such win since 2011.

The 2019 Exporter of the Year Awards, which is now in its 19th year is meant to recognize and celebrate exporters in the province of KwaZulu-Natal.

Sumitomo Dunlop faced tough competition in the Africa company category, with Sappi Southern Africa and Imperial Armour being the other companies that were amongst the finalists.