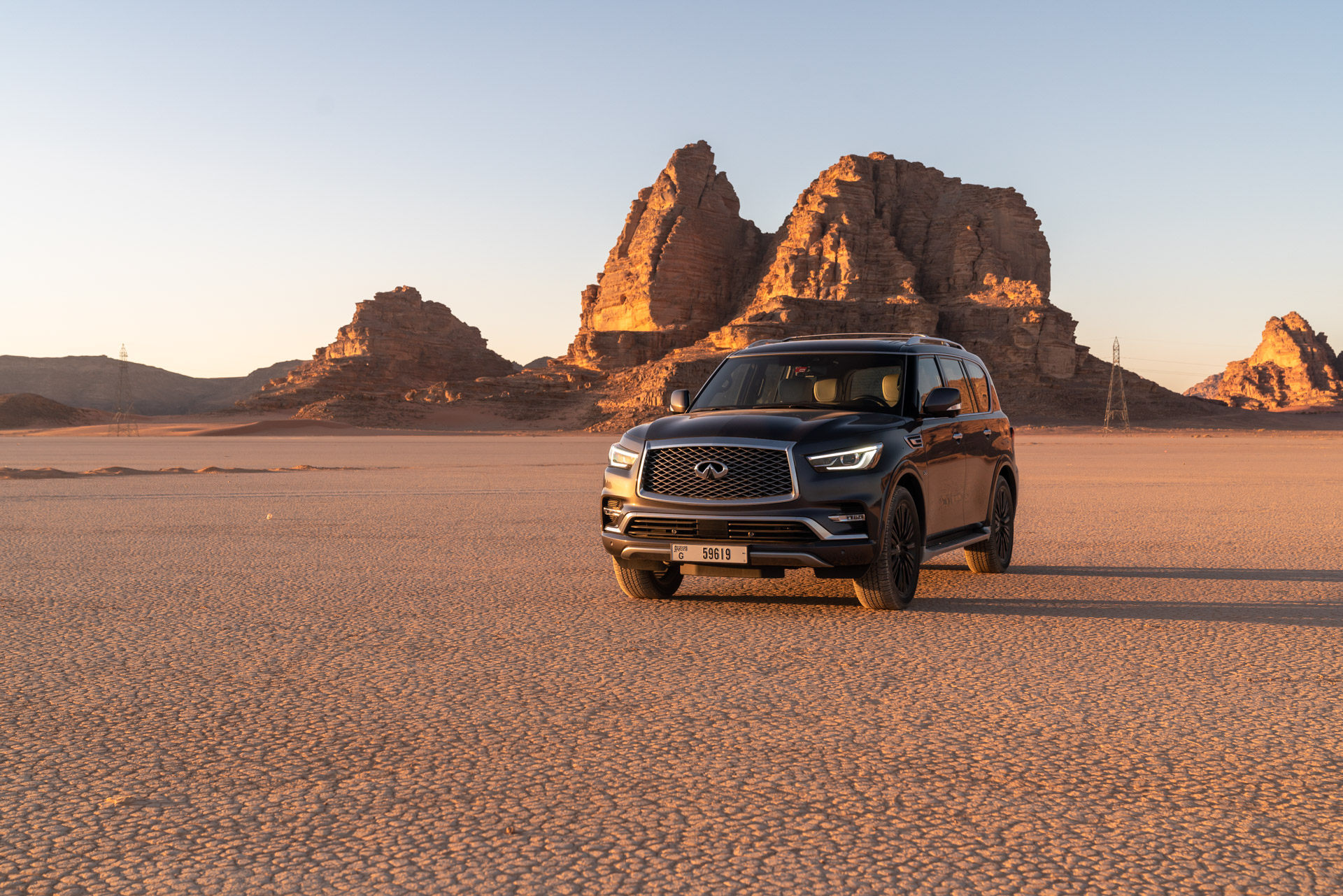 Infiniti marked its 30th anniversary in the region with support for a mini expedition in Petra, Jordan to visit a new archaeological site in a fleet of the brand’s SUVs while using NASA imaging technology.

The expedition was led by National Geographic Fellow and Archaeology Professor Sarah Parcak, who had played a major role in the discovery of the new site in Petra with the help of remote sensing satellites and drones. Infiniti used a fleet of QX80s and QX50s to follow the ancient King’s Road from the Dead Sea to the historic site of Petra. As part of the media trip, a small team of journalists explored areas near the monument that Parcak had discovered and which was essentially “hiding in plain sight.” Parcak, along with a colleague chanced upon a 50 meter by 100 meter platform just south of Petra with the help of satellite and drone remote sensing technology. According to the scientific survey, there are no similar structures to their discovery in Petra.

Parcak is a frontrunner when it comes to the use of remote sensing in archaeology and had recently published a book titled “Archaeology from Space.” Commenting on her discovery, she said that satellites are one the tools that archaeologists can use to get a better understanding of the area around the sites where they work. They can be used to discover features on sites or even complete sites in a time and cost-efficient manner. She said that it can take decades to survey regions, and with the help of satellites, archaeological teams can zoom in on specific areas to study in greater detail.

“I think the great thing about INFINITI is that is not weighed down by any preconceived notions of what a car should be,” she added. “From the outside looking in, it seems to be a company that is willing to take risks and innovate- especially with the push to make all their cars electric in the next few years.”

Commenting on the expedition, Trevor Hale, General Manager INFINITI Global Communications and member of The Explorers Club said that over the past 30 years, Infiniti has a history of technological firsts, of pushing boundaries and helping people to find their next frontier.

He said that Infiniti celebrates people like Dr. Parcak who is helping archaeology to evolve with the use of new technology.

He added, “We are constantly pushing ourselves to explore new possibilities through technology to empower our customers on the road and in life. What better place than Jordan to recognize those who have challenged convention? Not only has there been cutting edge technology used to discover more aspects of Petra, which has been explored so many times; but to stand in the footsteps of Jordanian leaders as well as Faisal I bin Hussein bin Ali al-Hashemi and T.E. Lawrence, who changed the rules of military engagement 100 years ago during their famous ‘march to Aqaba’, as well as later attempts to unify the region.”

Parcak said that her idea is to make archaeology accessible for everyone. Currently, archaeology is seen as something that is not too connected to our daily lives, and as something that only academics deal with. Although archaeologists are making greater efforts to engage with the public, especially in the case of younger archaeologists, she felt enough has not been done and says that the public, especially students, need to see more women and indigenous and black and Asian archaeologists being highlighted on public platforms. They need to know that the contributions such people make are valid and essential.

This is why Parcak started Globalxplorer, with the goal of empowering as many people as possible to feel like they too can play an important role in telling the shared human story.
Parcak used the TEDtalk prize money she had earned to start Globalxplorer, which serves as an online platform that uses the power of the crowd to analyze in greater detail the satellite images that are currently available to archaeologists. GlobalXplorer was launched in 2016 with the aim of helping everyone discover the wonder of archaeological discovery and to help them better understand the connection of human beings to the past.

So far, Dr. Parcak has used her techniques to locate 17 potential pyramids, in addition to 3,100 potential forgotten settlements and 1,000 potential lost tombs in Egypt. She has also made significant discoveries in the Viking world and Roman Empire. With the help of amateur scientists across the globe and the Globalxplorer platform, she hopes to uncover much, much more.

“The INFINITI Jordan experience represents the convergence of persistence, resilience and innovation, as we celebrate the brand’s 30 year journey. We chose Petra for this adventure, one of the oldest known civilizations in the world, for its symbolism of the progressive challenger spirit. The historic Nabatean community were opportunists, entrepreneurial at heart, and forged their own path in life – qualities that find synergies with our own brand and INFINITI customers. As we explore their lasting legacy with new discoveries in Petra, we celebrate those who challenge convention”, said Markus Leithe, Managing Director, Infiniti Middle East.

This is not the first such expedition that Infiniti has helmed. Last year, Infiniti partnered with The Explorers Club to lead a very successful Qxploration expedition in the Gobi Desert which pioneered the use of similar remote sensing technology to update the manner in which paleontology is conducted. The expedition retraced the route of renowned explorer Roy Chapman Andrews (who supposedly inspired the character of Indiana Jones) 100 years after he discovered dinosaur eggs at the Flaming Cliffs in the Gobi. Andrews was the first explorer to use motorized vehicles, in order to make his research more efficient.

The Gobi expedition used similar advanced mapping technology to identify likely locations where fossils might be found. The 35-person multidisciplinary team found likely evidence of three new dinosaur species, over 250 new fossil locations, five entirely new areas which were not earlier known to have fossils, and hundreds of fossilized bones, including those of mammals.

Paleontologists went through data collected from satellite and drone imagery to identify locations that offered high probability for fossilization, based on geological and sedimentary markers. The team then used a fleet of Infiniti SUVs to travel quickly to these sites and prospect for fossils. The use of this combination of satellite and drone imaging by the team of paleontologists was a venture that had never been conducted before.

In the case of the Petra expedition, Infiniti used a fleet of full size 4WD QX80 and its all new mid-size premium QX50 crossovers to transport expedition members and equipment efficiently and comfortably to locations near Petra. The vehicles came with innovative technological features which helped make the expedition luxurious as well as safe including Active Noise Cancellation to minimize driver fatigue during the long trips between sites, NASA-inspired ergonomic seating and the most notable feature – the Around Vehicle Monitor which was used for, a 360-degree overhead view to help avoid rocks, ruts and encounters with the local Jordanian wildlife.

The QX50 is an SUV which sports the first variable compression ratio engine (VC-Turbo) engine in the world with an ideal combination of power and fuel efficiency. The QX50 has the latest semi-autonomous drive technology and has already been launched in international markets.

The new QX80 has been designed to deliver passengers and supplies with the highest level of comfort and luxury. Powered by a 5.6L V8 engine, the QX80 has four driving modes, providing secure traction at all.