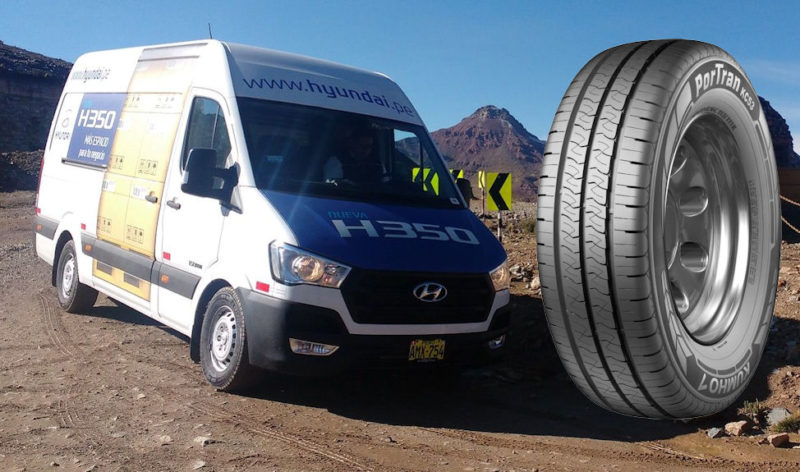 Kumho has made what the company claims is the first 20 inch commercial vehicle tire in 45 profile, according to a statement released by the company. This achievement further highlights the great progress the company has made in the development of innovative products and technologies from the time it was established in 1960.

Kumho will be supplying the tire as the OE fitment for Hyundai’s Solati Limousine, the company’s premium minibus. Called the Kumho ProTran KC53, the tire will be used for the vehicle in size 245/45R20C 115/113R.

The Solati Limousine was originally fitted with 16 inch tires. Hyundai issued the challenge of increasing the size of the tire to 20 inches to several tire manufacturers. Kumho was the only company that managed to develop a tire that was good enough to meet Hyundai’s requirements.

Lee Younchang, head of light commercial tire development at Kumho Tire said that the OE approval of the unique 20-inch, 45 series PorTran KC53 for exclusive fitment to the Solati Limousine further attested to Kumho’s advanced technical capabilities. He added that Kumho would continue to develop proprietary technologies that would allow the company to manufacture products of the highest quality and meet the needs of its customers.

The Solati Limousine was launched in 2015 and is primarily meant for sale in the Korean and European markets. It is manufactured in Jeonju, Korea and is also assembled in Turkey as part of Hyundai’s collaboration commercial vehicle specialist Karsan in a joint venture company. In Europe, it is sold as H350.

The vehicle boasts a sophisticated design, high levels of quietness and a roomy interior, and has become increasingly popular. Last year Hyundai worked with SM Entertainment to redesign the limousine for use by those in the singing and acting professions – a collaboration that inspired the ‘Solati Moving Hotel’, which garnered for Hyundai a “Red Dot: Best of the Best” award.