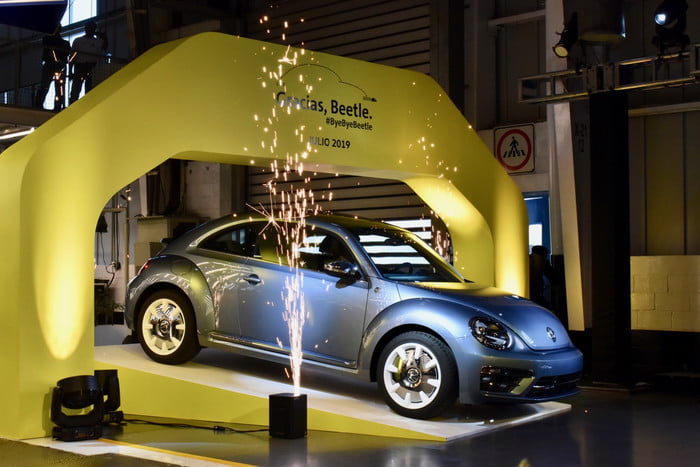 Volkswagen’s last Beetle ever came off the production line this month. The Beetle is arguably, the most popular vehicle model, and lasted for over 70 years of production and three generations. The final Beetle was made at the company’s assembly line in Puebla, Mexico, and was serenaded by a Mariachi band when it came off the assembly line. The factory will now engage in the production of a new SUV for the North American market.

The third generation of the Beetle has not been as popular as the previous two generations. The original Beetle, also known as the Type 1, was made during the Nazi years and was a cultural icon. The last Beetle of the first generation was made in 2003 and over 21.5 million first-generation Beetles were sold across the globe. The second-generation Beetle was launched as the New Beetle as the original Beetle was still being made in Mexico. It helped kick off a wave of retro designs and 1.2 million of the New Beetle was sold between 1998 and 2010.

The third-generation Beetle was supposed to offer a combination of the classic Beetle styling with modern mechanicals. It however failed on the cuteness front as Volkswagen tried to broaden its appeal with a more conventional appearance. VW also tried many things like launching a #PinkBeetle model to make the model popular, but it failed to create an impact. The third-generation Beetle never did become a fashion icon like the original Beetle.

Volkswagen had announced back in 2018 that it would soon end production of the Beetle and launched a special-edition version to mark the end of the production run. The last Beetle, a Denim Blue coupe, will be displayed at Volkswagen’s museum in Puebla. The last 65 cars to be sold to customers will be offered in Mexico through Amazon to test online sales. The last Beetles made for the US market — a pair of Kings Red cars with custom dashboards, keys, and quilted seats, will be part of Volkswagen of America’s historic collection.

Volkswagen has no plans to make a direct replacement for the Beetle. According to the company, the plan is to use the production capacity at the Puebla factory for making a “new compact SUV tailored to the North American market, slotting into the lineup below the Tiguan”, according to a VW press release.