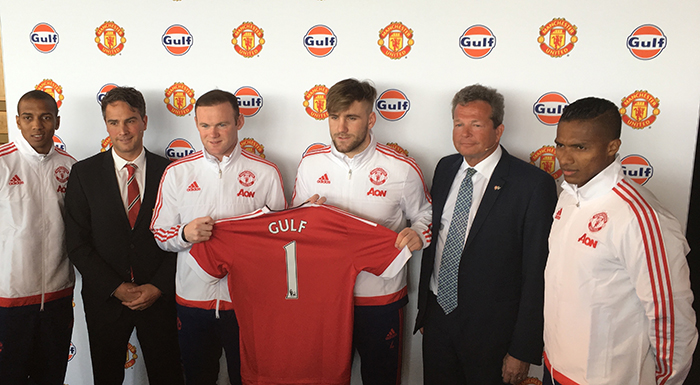 For the very first time in history, Gulf Oil International and Manchester United, the world’s premier football brand, has recently entered into a long-term partnership. The partnership will run initially until the end of the 2018-19 football season and marks the grandest single partnership ever undertaken by the global oil and fuel brand.

This initiative will see Gulf Oil as the Official Global Lubricant and Fuel Retail Partner of Manchester United. As per the agreement terms, Gulf Oil International, a Hinduja Group Company, will have access to Manchester United assets, including the club crest and player images as well as Gulf’s unique orange disc will be featured on the Club’s digital perimeter boards during FA Cup, Premier League, and League Cup matches at Old Trafford.

The collaboration marks a further step in Gulf Oil’s target to reinforce its brand presence worldwide and will enable it to engage with Manchester United’s worldwide fan base, including 325 million followers in Asia, which the company eyes as a key focus area with a strong presence in India and quickly developing businesses in Indonesia, China and the Middle East.

According to Gulf Vice President International, Frank Rutten, Gulf Oil International is considered as an iconic brand in motorsport circles, but this is a truly thrilling opportunity for them to expand beyond their motorsport sponsorships and to stand on the global stage, showcasing the ambition and growth aspirations of the brand. He noted that the partnership with Manchester United brings together two brands with incredible heritage, a pride in performance excellence and the ability to listen to the wishes of their customers – the fans, in the case of Manchester United – and turn it into action. “We are extremely excited about the prospect of moving forward together.”

With the presence of Gulf Lubricants in over 110 countries globally, petrol stations in 22 countries and a thriving global marine business, this new collaboration reflects the commitment of the company to continually add value to its customers’ offer when using its fuel stations or lubricant oil products. Moreover, the partnership reflects Gulf Oil’s on-going desire to be an extraordinary oil company, as exemplified by its core values of “Quality, Endurance and Passion”.

Richard Arnold, Manchester United Group Managing Director, said that while both Manchester United and Gulf Oil International have evolved and adapted since their foundation over 100 years ago, neither has forgotten its roots, noting that Gulf always seeks to showcase its core values of quality, endurance and passion—principles that are also held by the Club.

“Gulf Oil International already has significant experience in sport and we are looking forward to working with them to expand that into football. Through this partnership we will further our commitment to reach our fans around the world, especially in Asia.”

However, the new partnership does not mean that Gulf Oil International is forsaking its involvement in the motor sport sector. Gulf Oil International Vice President of Brand and Marketing, Vicki Kipling, pointed out that Gulf is expanding its horizons in motorsport this year. “We have recently announced a three year technical partnership with BMW’s Manufacturer- backed squad, Team Milwaukee BMW, in World Superbikes; we will be back at Le Mans again this year and competing in the World Endurance Championship with the Gulf Racing Team and their Porsche, and we will again be partnering the world’s most powerful motorbike as Ian King goes for a tenth Top Fuel drag title.”

Kipling concluded that all of those complement their partnership with Manchester United in the football arena and provide Gulf Oil International with an incredible global marketing platform from which to continue the quick growth journey on which they have embarked.