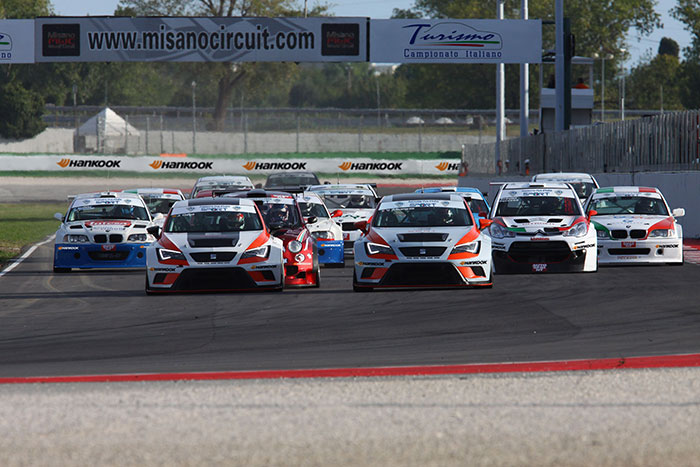 Hankook has signed an exclusive contract with ACI Sport to become the official tire of the Italian Touring Car Championship. The leading tire manufacturer will be the exclusive tire supplier for the new touring car series for the next two years. The 2016 season is scheduled to begin on May 22 with a race in the town of Monza in northern Italy and will comprise seven racing weekends. Only cars which have four doors and are equipped with 2.0 liter 4-cylinder turbo engines and having front-wheel drive are eligible to participate in the race and of them will be provided with Hankook Ventus Race tires in size 260/660 R18. Models which are scheduled to participate in the series include those from brands like Alfa Romeo, Opel, Subaru and Volkswagen.

The Italian Touring Car Championship consists of not only the TCR series, but a TCS series as well for inspiring young racers to explore the touring car sport category. One notable characteristic of the TCR series is that only minimal modifications to standard vehicles are permitted except when it comes to chassis settings, the electronic engine and the exhaust settings.

Commenting on the partnership, Hankook’s Motorsport Director for Europe Manfred Sandbichler said that the company was very pleased to win the contract for exclusive supply of tires to the Italian Touring Car Championship from the 2016 season. Currently, touring car sport is becoming increasingly popular and the TCR series across Europe has contributed to its popularity. important through the TCR series across Europe. After signing on as the supplier for the ADAC TCR series in Germany, the Italian TCR series will be the second such series to have an exclusive partnership with Hankook Tire.

According to Marco Rogano, Director General ACI Sport, getting Hankook on board as the exclusive tire partner was a major step forward. He said that Hankook is definitely the right tire partner as it has premium tires which will provide racers with top performance for tackling Italy’s highly demanding race tracks.

Hankook is constantly expanding its involvement in motorsports and is already the exclusive provider of tires for renowned races like the FIA Formula 3 European Championship, the DTM series and and 24H Series powered by Hankook. When it comes to the TCR series, the company had recently tied up with ADAC TCR Germany.