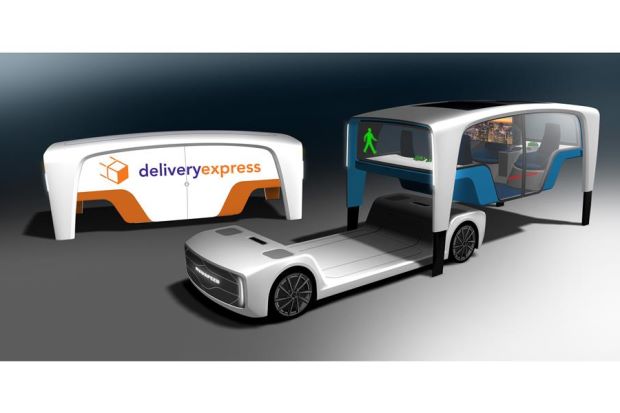 Ever heard of a detachable chassis? That is the new idea that Rinspeed, a Swiss automotive think tank which came up with the idea of sportscars having drones in the back and transportation pods having window gardens has come up. Rinspeed is planning to showcase its latest autonomous car concept at the 2018 CES that is scheduled to be held in Las Vegas next January. Rinspeed’s concept vehicle takes into account the mobility needs that consumers are likely to have in the future.

The chassis of the concept car will be able to detach from its body, so that the motorized component can go off to collect a new body and thus offer a new service.

So, the concept vehicle which is called Snap could be a mobile office and relaxation space which could detach the office pod in an urban area and then head off to be refitted as a truck that might deliver goods to your local supermarket.

Snap’s creator, Frank M. Rinderknecht, says the concept is similar to using a motorized skateboard as a trolley for transporting something which is too heavy to carry. Once it reaches its destination, it hives off its load and then returns to collect its next assignment. In the ideal scenario, all the components would be autonomous and have the capability to process digital maps so that the vehicle can find its way without any difficulty. When the on-board processors and other technical components are out of date, only those elements would need to be updated. Once they are updated, they would still be compatible with the other pods they are transporting, whether it is one ofr a family road trip, a delivery vehicle, an office space or a pop-up store.

The Snap concept vehicle was developed with inputs from leading automotive suppliers like Harman International, Tom Tom, SAP and ZF. The vehicle will be displayed from during the Consumer Electronics Show from January 7 to 12 at the Las Vegas Convention and World Trade Centre.