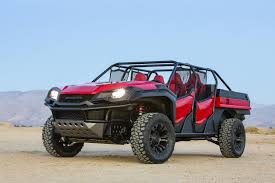 Honda impressed visitors to the 2018 SEMA Show with an open-air concept vehicle. The concept vehicle would be right at home in Dubai as it was a mashup of Honda’s popular midsize pickup truck model, the Honda Ridgeline and a Pioneer 1000. The concept vehicle which was simply called the Rugged Open Air Vehicle Concept was billed as the ultimate All Terrain Concept Vehicle.\

The vehicle showcased at the Honda booth was derived from a Ridgeline body and suspension but had many modifications. The bed area and tailgate were customized pieces that looked more like they belonged on the Pioneer 1000. Other components borrowed from the Pioneer 1000 included a set of doors which replaced the doors of the Ridgeline.

When it came to the interiors, the Ridgeline was opened up so that there would be exposure to the elements. The seats were similar to those used in the Civic Type R but were upholstered in the kind of waterproof material that is used on the Pioneer 1000. The steering wheel also came from the Pioneer 1000 with modifications in order to fit the steering column of the Ridgeline. Other modifications included Ram Mounts’s cell phone holders to help any smartphone within easy reach. The instrument cluster comes with durable painted surfaces so that elements of the weather would not interfere with the operation of the gauges.

The Rugged Open Air Vehicle Concept was developed by Honda R&D Americas, and while it was said to be strictly a concept vehicle for now, we will never know when these features might be seen on a Honda model.