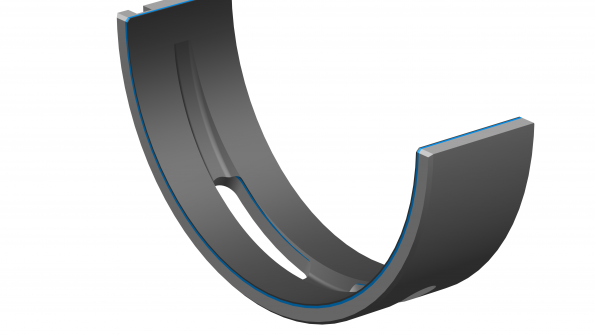 Rheinmetall Automotive has launched a new range of main and connecting-rod bearings. These bearings have been specially designed to tolerate the high ignition pressures and increased use of low-viscosity oils by hybrid vehicles.

When the first generation of hybrid engines made their appearance, they used moderate start/stop technology and increased ignition pressure. This was not the case for the next generation. In the case of mild or plug-in hybrids, the number of start/stops during the lifespan of a vehicle went from 400,000 to over 1 million. When this is combined with belt-driven 48-volt starter/generators, the belt forces on the crankshaft bearings increase significantly and there is greater mixed friction.

KS R53L1 offers excellent wear resistance without any compromise when it comes to other parameters like the strength and coefficient of friction even under the most adverse mixed-friction conditions. The R53 material meanwhile acts as a substrate beneath the new L1 polymer layer system, and due to its special tolerance to dirt provides added robustness thanks to its special dirt tolerance.

KS R55L1, which is meant for hybrid gasoline connecting-rod bearings, involves a combination of the L1 polymer layer system with the stronger R55 two-layer substrate material. When it comes to medium- to high-duty gasoline engines, the new KS R55L1 material provides the benefits of the wear resistance needed for full hybrids and low oil viscosity applications, as well as high dirt tolerance.
Gleitlager’s first generation of polymer bearings already have solid molybdenum disulfide and graphite lubricants and the new KS R53L1 and KS R55L1 polymer bearings will help demonstrate a low coefficient of friction throughout the entire mixed-friction range. This can go a long way towards reducing crankshaft friction losses and, in turn, reduce fuel consumption and emissions.