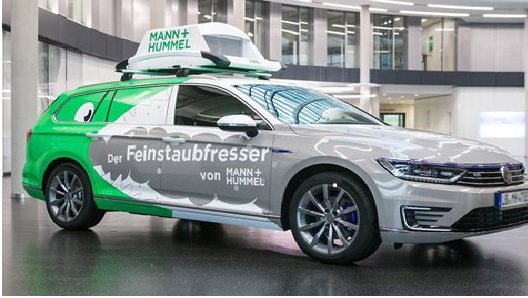 One of the main issues related to living in cities is the pollution caused by high dust and toxic emissions from vehicles. With vehicular pollution being considered as a main contributory factor to this pollution, leading German filtration specialist MANN+HUMMEL has focused on research in this area and has begun field tests of several new technologies with a test vehicle.

The test vehicle was equipped with three applications that have the capability to reduce fine dust pollution. One is a filter installed on the roof that can separate particulate matter from the ambient air. Another is an innovative cabin air filter inside the vehicle. A brake dust particle filter prevents fine dust particles from entering the environment. The technologies have been extensively tested on test drives throughout the region of Stuttgart.

The low-flow resistance of the fine dust particle filter on the roof of the car facilitates excellent air throughput and a simultaneously high separation efficiency. MANN+HUMMEL conducted computer simulations which showed that particulate emissions caused by fuel combustion could be completely compensated by using the fine dust particle filter. MANN+HUMMEL will conduct further field tests under real driving conditions.

The newly developed cabin filter uses an activated carbon mix to separate toxic nitrogen oxides (NOx) and other harmful gases from the air in the cabin. The filter has an innovative coating to reliably bind high volumes of ammonia while the ultra-fine nanofibers in the inside of the filter provide protection against particulates and pollen.

MANN+HUMMEL started working on this innovative project to reduce particulate levels as early as 2007 and has collaborated with several external partners as part of the project. In the case of the particulate filter MANN+HUMMEL worked with Albert Kamm, managing director of TEAM KAMM GmbH for expert services related to vehicle engineering and service.