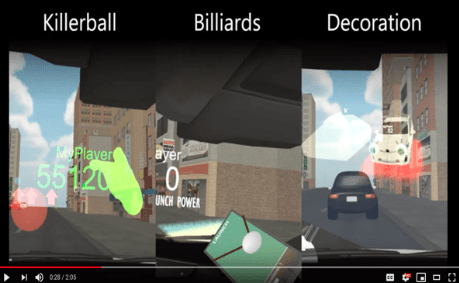 Research Team Develop Games that can be Played in Autonomous Cars

A research team at Waterloo University in Canada has developed a series of video games that passengers in the autonomous cars of the future could one day play with each other.

With the outlook for autonomous vehicle technology brightening day by day, researchers have now come up with potential ways in which passengers who have plenty of free time while riding in such vehicles could entertain themselves. A research team at Canada’s Waterloo University has developed three games that could passengers in cars which are near each other on the road could play.

The games were revealed during a study that was presented at a recent conference and the games are meant to be used in vehicles which have Level 3 autonomy or higher. Level 3 autonomy calls for very little involvement on the part of the driver. Tesla’s famous Autopilot exhibits Level 2 autonomy which means that the driver needs to focus on the road even when the car is driving itself.

‘People were happy to play with strangers’

The researchers found that in the case of previous studies related to autonomous vehicles, very little attention had been given to cross-car games. Hence, they went on to develop a virtual reality driving simulator to render the car cabin, outside environment and roadway with artificially controlled cars and intelligent computer-controlled players.

This environment facilitated the rapid prototyping of in-car games that could include full window head-up displays (HUDs), head tracking and different input methods. 12 people participated in playing the simulated cross-car games with instances where the driver would need to occasionally take over.

“Overall, the participants rated the games highly in immersion, there was a positive response to the incorporation of HUDs in the games, and the different game styles did not significantly impact the takeover task completion time. All games were popular for different reasons,” Lakier said.

Lakier concluded by saying that people showed no reluctance to play with strangers leading to the formation of impromptu relationships with other people on the road.