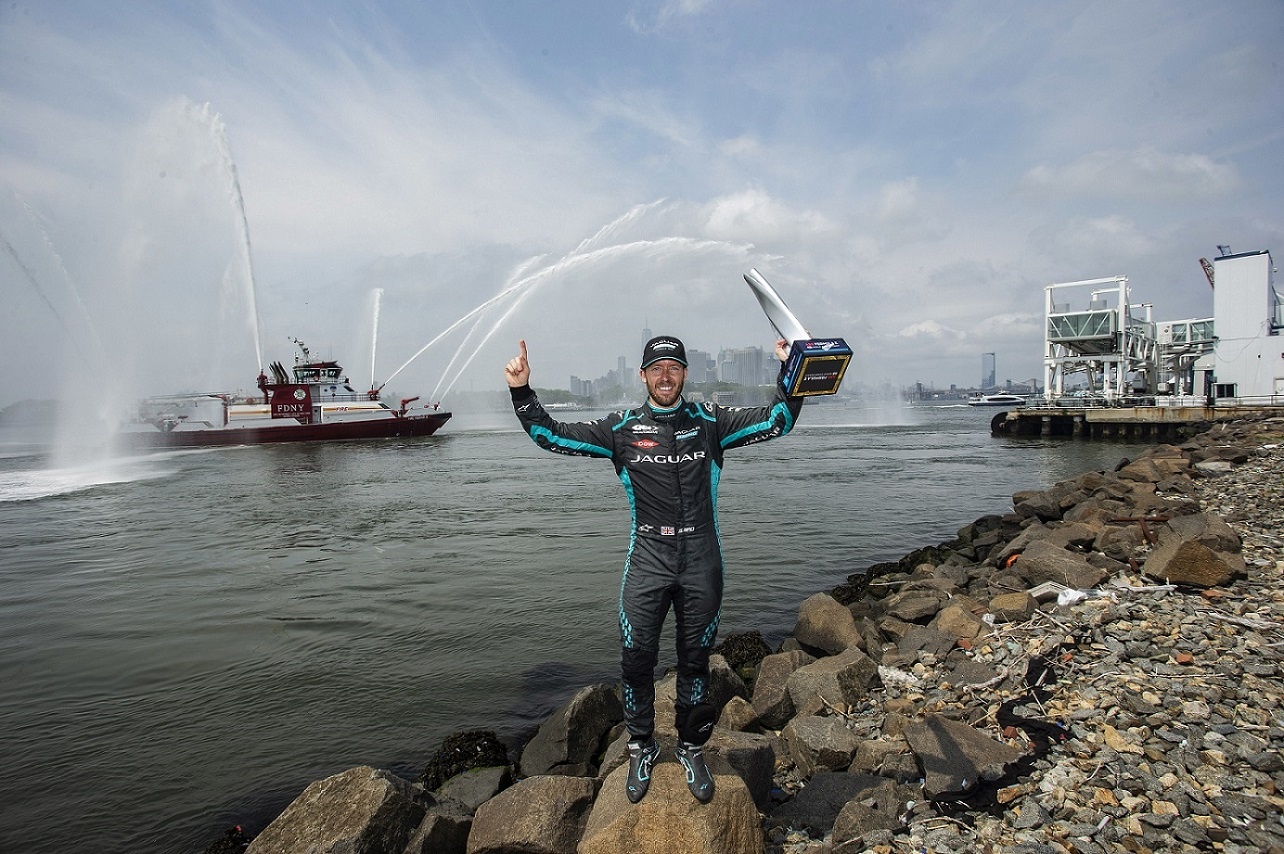 Jaguar Racing driver, Sam Bird, created history by winning the ABB New York City E-Prix for the third time in a lights-to-flag victory. The Brit is the only driver to have won three times at the same circuit in Formula E history and retakes the lead of the drivers’ world championship.

For the first time in the team’s Formula E history, Jaguar Racing locked-out the front row with Sam Bird on Pole and Mitch Evans in second after both drivers made it into Super Pole on the streets of Brooklyn. After crashing in free practice yesterday, Bird’s mechanics and engineers faced a race against time to rebuild his Jaguar I-TYPE 5. The Brit rewarded the team with 29 points out of a possible 30 today by also topping qualifying.

A potential double-podium finish evaporated when Mitch Evans, defending from Envision Virgin Racing’s Nick Cassidy, clipped the wall in the final couple of minutes of the race and was forced to limp the car home in thirteenth.

Sam Bird is back at the top of the Drivers’ Standings, while teammate Mitch Evans is now eighth. Jaguar Racing are third in the Teams’ Standings, just five points behind Envision Virgin Racing with four rounds of the championship remaining.

James Barclay, Team Director Jaguar Racing, said: “It has been a fantastic day at the ABB New York E-Prix. Today we made our own little bit of history by locking out the front row with Sam and Mitch. Both drivers topped their group qualifying sessions and made it into Super Pole before executing fantastic laps. The race itself was a great performance from Sam and the team completing a perfect lights-to-flag victory. Mitch was having a great race controlling the gap to Nick Cassidy behind him but unfortunately when he hit the wall it broke the rear suspension taking him out of the points when he was agonisingly close to the finish line. It’s a bitter sweet feeling but Sam is back leading the Drivers’ Championship and we’re now very much in the fight. We are going to use this momentum in London in just two weeks time and cannot wait to be racing on home soil for the first time for Jaguar Racing in Formula E.”

Sam Bird, #10 Jaguar Racing driver, said: “What a day today! That’s 29 points out of a possibly 30 so I couldn’t be happier. I’m so delighted and proud of my team right now. After yesterday, this is everything we needed and it feels so good. Thank you to everyone at Jaguar Racing and I can’t wait for London.”

Mitch Evans, #20 Jaguar Racing driver, said: “I’ve been waiting for a race like this for so long and I messed it up here in New York. I had a lot of front rotation and I couldn’t hang on to it in one particular lap and that’s enough to spoil your day. I’m really, really gutted and this one hurts a lot but I just want to say a huge congratulations to Sam. We’ll now look to London where I hope to score points again.”

Jaguar returns to the United Kingdom to race for the first time in 17 years, for rounds 12 and 13 of the ABB FIA Formula E World Championship. The double-header takes place in two weeks’ time on Saturday 24 and Sunday 25 July 2021.