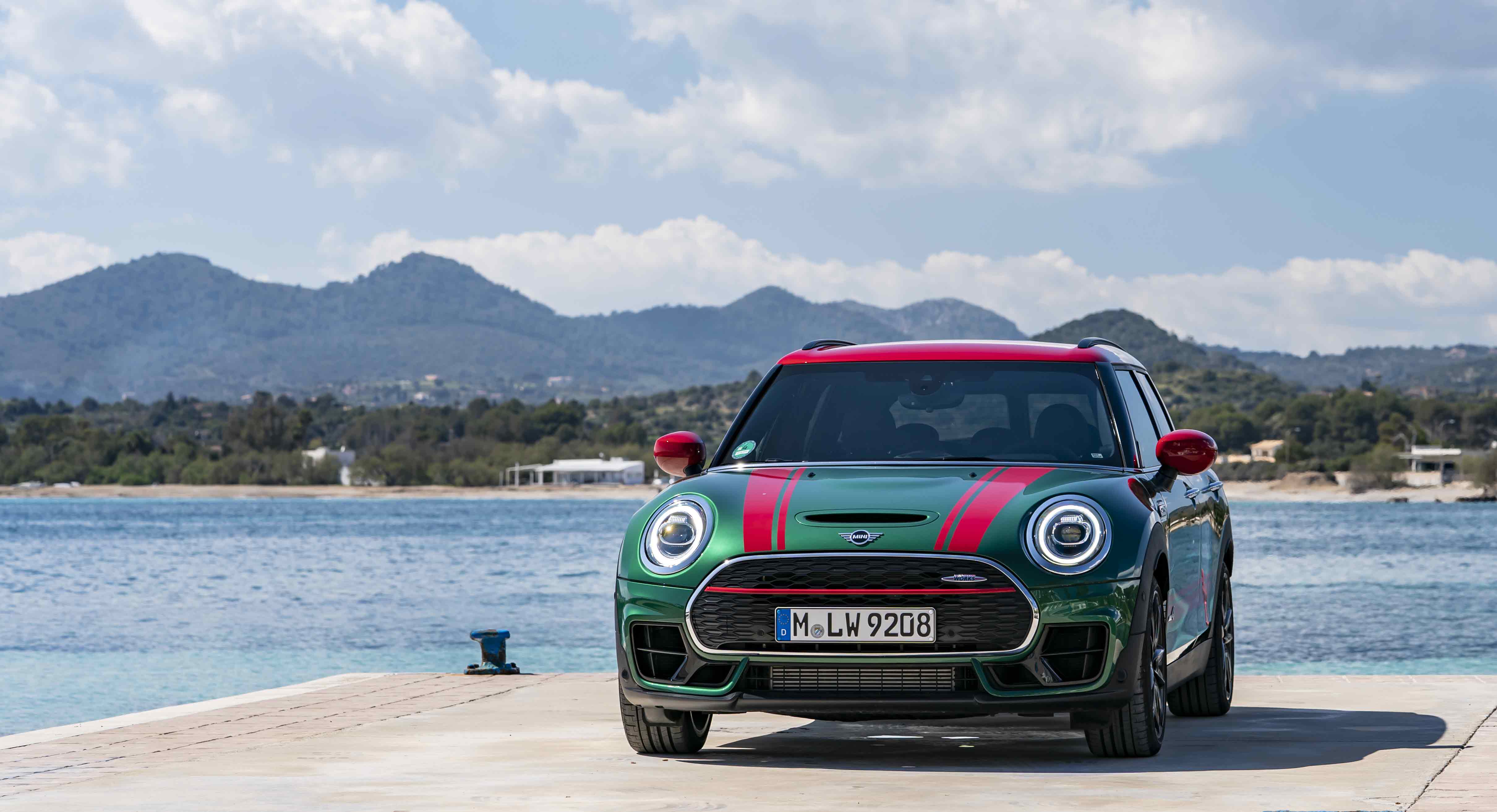 Rambla to the race track with the MINI John Cooper Works Clubman on Mallorca.

Almost 14 million tourists were counted on the Spanish Mediterranean island of Mallorca in 2019. Due to the recent travel restrictions, the rush of visitors was slowed down considerably in the meantime, but now the holidaymakers are returning. There is no shortage of reasons for this. Some long for relaxation on the beach or in luxurious hotel complexes, for some the party atmosphere at Playa de Palma is the focus of interest, and still others swear by “the other Mallorca”. Lonely bays, unspoilt landscapes and small, unspoilt villages away from the tourist strongholds can be found in almost all regions of Mallorca, as a round trip of the island in the MINI John Cooper Works Clubman (fuel consumption combined 7.9 – 7.4 l/100 km according to WLTP, 7.0 – 6.6 l/100 km according to NEDC; CO2 emissions combined: 180 – 168 g/km according to WLTP, 161 – 151 g/km according to NEDC) shows. With its storage space that can be expanded from 360 to up to 1 250 litres, the extremely sporty premium compact model offers enough room for holiday luggage and, with ALL4 all-wheel drive as standard, is also confidently on the move where a particularly beautiful stretch of beach can only be reached via unpaved roads or gravel tracks.

The standard equipment of the MINI John Cooper Works Clubman not only includes an emphatically sporty flair in the interior, but also a multifunctional instrument display on the steering column as well as a new operating system with which vehicle functions, audio programme, communication, navigation and apps can be controlled particularly quickly and intuitively. The respective menu items are now displayed in modern form as live widgets on the 8.8-inch touch display in the central instrument and can be selected with a swiping motion similar to that on a smartphone. This makes it even easier to enter destinations when searching for island locations worth seeing, and the right music programme for the journey there is also available in no time at all. There is also a choice of two colour worlds for the graphics on both displays: relaxing blue and turquoise tones in “Lounge” mode or a combination of red and anthracite in “Sport” mode.

The discovery tour in the MINI John Cooper Works Clubman begins in Palma de Mallorca. Like many Spanish coastal towns, the island capital has a Rambla. On the plane-lined promenade in the centre of the city, numerous florists offer their wares. It was once built in a dry riverbed, so the term rambla can also be translated as “street leading to the sea”. The Passeig des Born, further south and not far from the cathedral, also has the character of a Rambla with its shady trees. From there it is only a few hundred metres to the marina of Palma.

The Real Club Náutico de Palma has its headquarters there and organises one of the most important sailing competitions in Spain every year. Members of the Spanish royal family have taken part several times in the Copa del Rey regatta, which is held in the bay of Palma. However, Mallorca offers ideal conditions not only for sailing, but also for numerous other disciplines. The many opportunities for active leisure activities are what make the island so appealing to many visitors. For example, the varied route profile with winding coastal roads and sometimes quite steep mountain stages forms a training ground that is popular with amateur and professional cyclists alike. Extreme swimmers cross the 40-kilometre-wide strait between the east coast of Mallorca and the neighbouring island of Menorca in less than ten hours. And for some years now, adventurous people have been practising coasteering, climbing on steep coastal cliffs.

Travellers to Mallorca who are enthusiastic about motor sports will also find what they are looking for on the island. Directly on the motorway, about halfway between Palma airport and Llucmajor, you will find the Circuit Mallorca, a car and motorbike race track with an attached kart track, which has been in operation for almost 25 years. Mallorca’s motor sport associations use the track for competitions on two and four wheels. For this purpose, there is a control tower, a pit lane, a starting light, an electronic timing system and grandstands for up to 1,500 spectators.

In addition, both local and foreign racing enthusiasts can optimise their driving skills on the Circuit Mallorca alone or under professional guidance. There are five left-hand and eight right-hand bends to negotiate on the asphalt track of the main circuit, which is around 3,200 metres long.

For the MINI John Cooper Works Clubman, the excursion onto the racetrack is a more than welcome opportunity to demonstrate the qualities of its drive and chassis technology developed with sound racing know-how. Its 2.0-litre four-cylinder engine with MINI TwinPower Turbo technology develops a maximum output of 225 kW/306 hp and a maximum torque of 450 Nm. The furious temperament enables acceleration from zero to 100 km/h in 4.9 seconds. The launch control function of the standard 8-speed Steptronic Sport transmission ensures perfect acceleration from a standstill. The MINI-specific ALL4 all-wheel drive system also contributes to traction-optimised power transmission.

In the tight and fast-stepping bends of the Circuit Mallorca, the precisely controlled power distribution between the front and rear wheels also promotes the agility and driving dynamics of the MINI John Cooper Works Clubman. The ALL4 system is supported by the differential lock integrated into the automatic transmission. Its mechanical locking function shifts the drive torque from the unloaded inside front wheel to the outside front wheel during particularly sporty driving. This makes it possible to turn in and accelerate out of every bend with maximum dynamics and without loss of traction. The sports braking system developed in collaboration with the specialist manufacturer Brembo ensures maximum precision when braking in front of the bend.

With its four-piston fixed-caliper disc brakes on the front axle, it offers constant deceleration performance and optimum pedal feel even after various high-speed laps on the Circuit Mallorca.

The fact that the powertrain also remains largely unimpressed by the heat of the race track and the Spanish sun is thanks to the model-specific cooling system of the MINI John Cooper Works Clubman. Two outsourced coolant radiators, an expansion tank with a particularly large volume, an independent cooling module storage, an electric fan with increased power and a third cooling level realised by means of a condenser ensure an optimal operating temperature of the engine at all times, even under extreme load. In addition, the transmission has a separate cooling circuit with a separate oil cooler.

So the MINI John Cooper Works Clubman remains a fascinatingly “cool” top athlete even after several laps on Mallorca’s hottest track. And the driver can also be helped. From the Circuit Mallorca it is only five kilometres to the beach of El Arenal, where the tides of the Mediterranean Sea provide cooling.