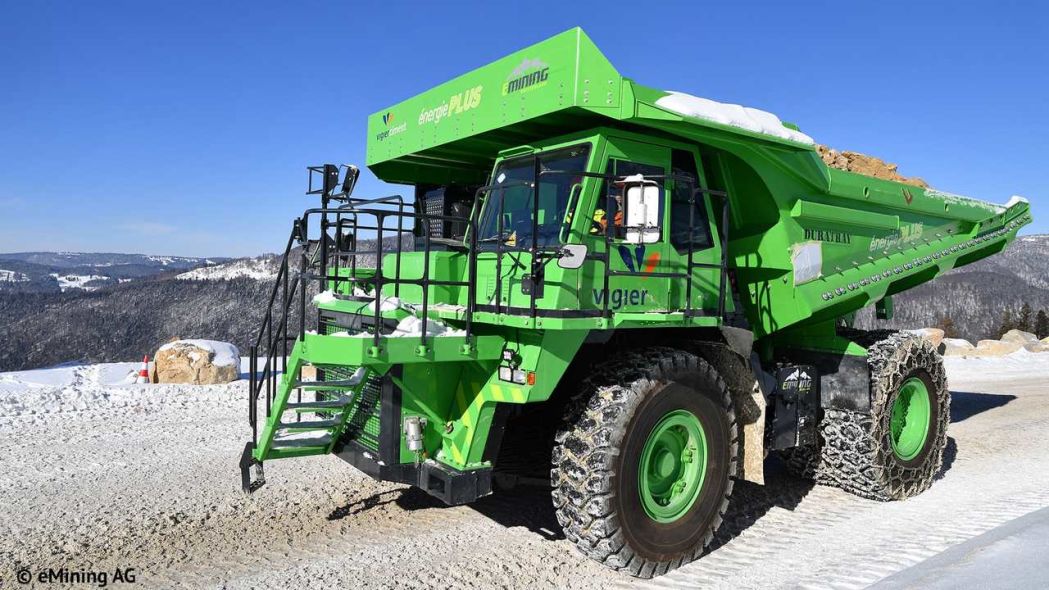 The Swiss division of Kuhn which specializes in making machinery has made what it says is the largest electric vehicle in the world. It is the electric variant of a mining truck that normally runs on diesel. The new vehicle, which is called the eDumper is already in use at a quarry which is located on the outskirts of Biel in Switzerland.

The eDumper is essentially a converted Komatsu HD 605-7. The vehicle normally runs on a straight-six turbodiesel engine having 23.1 liters of displacement. Its dimensions are 30 feet in length, 14 feet in width, and 14 feet in height. Kuhn Schweitz, the Swiss subsidiary of Kuhn replaced the six-cylinder engine with motors that work on electricity generated by 9,000-pound, 600-kWh lithium-ion battery pack. This is six times the power that is needed to run a Tesla Model X.

The eDumper has infinite driving range as the battery pack works with regenerative braking technology and thanks to the operating conditions of the vehicle, it leverages this technology to good effect. The 45-ton eDumper is driven up a 13-percent incline to pick up 65 tons of lime and marl that it needs to transport to a cement factory that is located nearby. The load is so heavy on the trip back down the hill that the regenerative braking system generates most or all of the energy that is used to go up the hill.

When CNN recently got renowned Formula E pilot Luca de Grassi to test drive the eDumper, he left with a 90 percent charge. When he got to the top of the hill, the vehicle had 80 percent charge left, and this charge increased to 88 percent after descending the hill. The explanation that Kuhn gave was that the eDumper normally makes more energy than it consumes. With the use of batteries as a source of power, the vehicle saves about 50,000 tons of diesel on an annual basis, which is quite a lot.

Kuhn’s eMining division is currently taking orders for the eDumper.