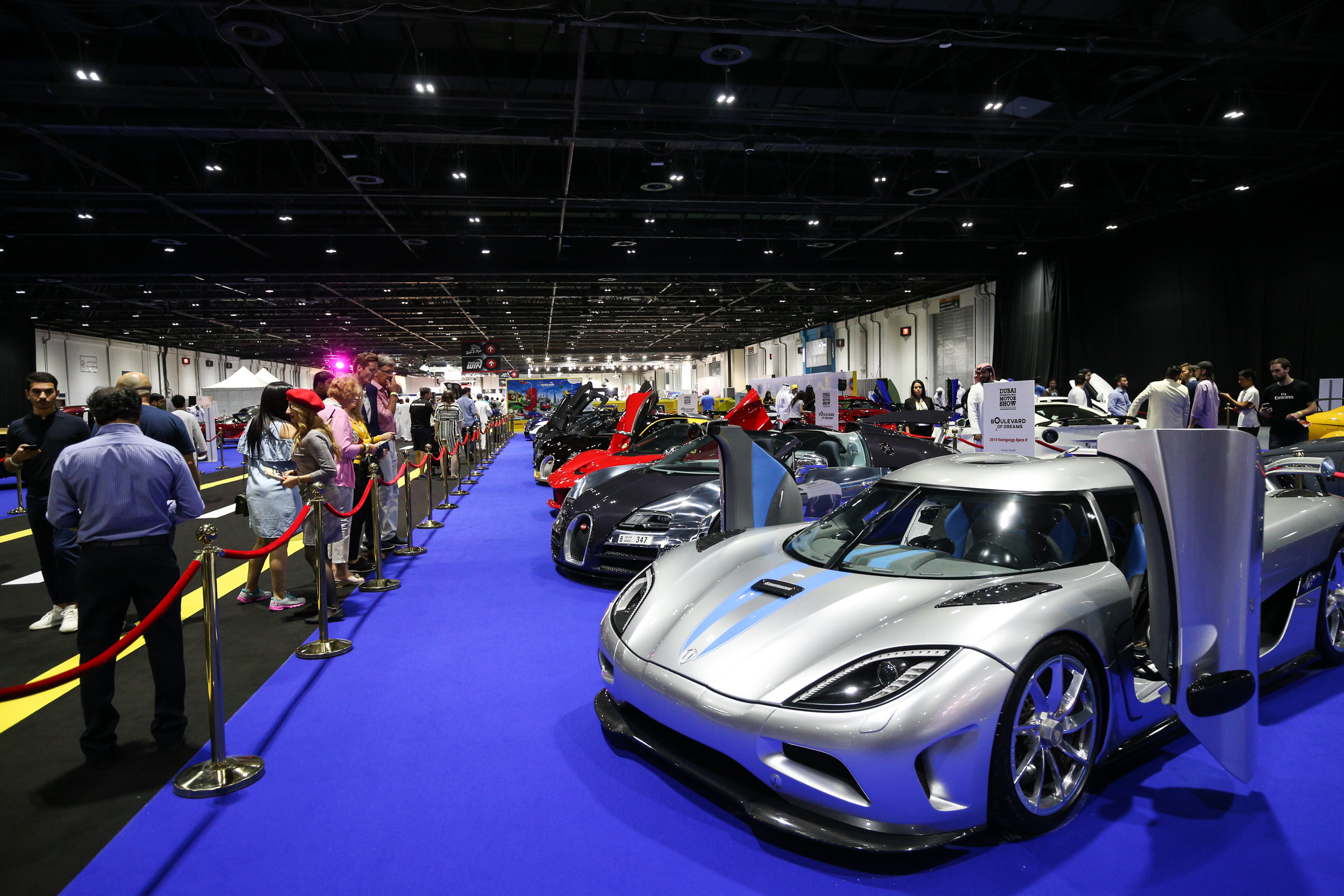 The 15th edition of the Dubai International Motor Show will be held next month with the main focus being on future mobility. It will bring under one roof over one billion dirhams worth of family cars, supercars and hypercars as well as highly advanced transport technologies like drones and Hyperloop technologies which are set to totally transform transport in the near future. The event promises to offer visitors a preview of the future of mobility with the tagline “Buckle up for big surprises”.

The show will be held from November 12 to 16 at the Dubai World Trade Centre and will feature innovative technologies, fully immersive VR/AR and some of the rarest models to provide visitors with is being billed as the ultimate deep-dive into the regional motoring and transport industry.

Leading players in the automotive industry like Mercedes-Benz, BMW, Ferrari, Maserati, Lincoln, Cadillac, Chevrolet, GMC, Jaguar Land Rover, Nissan, Mitsubishi and many more will be showcasing their latest models at the show. The UAE’s own Ajlani Motors will be using the show as the platform to launch its Hypercar which has already made news at the global level.

Commenting on the show, its director, Andrew Wingrove said that this year’s edition is set to be the most advanced and experience-oriented show ever in the event’s 30-year history.
He added, “Since our last edition, we’ve seen the synergy between driving, motoring and the AI-led technologies at the heart of our future living – which will all come alive in Dubai. This is a shift that has gone well beyond digital dashboard add-ons to now being the mastermind behind how our vehicles operate and even communicate on the road, with experts predicting there will be 220 million 5G-connected cars on the road by 2024.

Transformation like this is forcing us to rethink the entire concept of driving and transport.”
He concluded by saying that visitors to the show will have a chance to get a close look at transformative smart car technology and the Virgin Hyperloop One. They will be able to take virtual reality test drives and plenty of augmented reality concept cars are expected to make their debut at the show.

The Dubai International Motor Show teamed up with vehicle design and prototype futurists Italdesign to bring two unique concepts to the show as part of its effort to explore the theme of ‘Future Mobility’.
The first such concept is the Pop.Up Next VR Experience, as part of which visitors can experience a thrilling inner-city drone flight through and above the streets of Dubai. This ride will provide them with a mind-blowing look at how use of drones can transform the concept of travel.

Italdesign will use its state-of-the-art 3D modelling studio to display how its team of creatives can use their digital capabilities to literally sculpt a car from start to finish in a 3D virtual environment, thus providing endless scope for vehicle design and modification.

Visitors to the show can also get to explore the capsule concept for the proposed Dubai to Abu Dhabi Hyperloop – the vacuumed tube that can fire passenger pods at speeds of up to 1,080kmph.
Powerhouse brands; global launches – including the debut reveal of the fastest electric car ever!
Many automakers plan to launch their latest models at the show. One launch that will be eagerly anticipated is the debut of the record-breaking Aspark OWL: the all-electric Japanese hypercar powered by 1,150 horsepower which takes less than two seconds to go from 0-100kmph. It is billed as the fastest electric car ever made and is currently in production in Osaka. The model will reportedly have a top speed of 280kmph, and 300 kilometers of range when fully charged.

Masanori Yoshida, President and CEO at Aspark, explained: “The Aspark OWL is the fastest high performance, zero-emission electric supercar ever seen. It is the first ever Japanese EV Hypercar and promises to be one of the most powerful cars ever made.

He said that he expects the Middle East to be a key market for Aspark vehicles and this is why the company chose to launch the final version of the OWL at the Dubai International Motor Show
Lebanese luxury and concept car manufacturer Zedro SAL plans to launch its all-new, 1250Hp, customizable Notorious at the show, while HongQi – the luxury brand owned by China’s FAW Car Company plans to debut as many as six new models.

Other key attractions at the show will include a stunning display of 20 stunning hypercars worth AED 500 million called the Elite Club curated by Group 63 – a club for AMG owners in Dubai. The display will include a unique, limited edition Bugatti Veyron, a USD 10 million Lamborghini Veneno and a Gumpart Apollo S.

To add to the experience, the show will feature high-speed go-karting, a full test drive area for buyersand live drifting by renowned drifters in the region. Many motoring celebrities and influencers will on hand to share their expertise on everything auto related including car modification and racing.
The only place to win USD 10k of upgrades – and even a vintage VW Beetle!

In an event first, the Motor Show’s debut Drive In, Tune Out feature will give 25 motorists the chance to win up to USD 10,000 of free upgrades to their car, which will be fitted right there and then at the show. Expert tuners and mechanics will be available for modifying upto five cars a day.

The Motor Show’s Classic Car Auction will be held over three themed days and will serve as a venue for the sale of many classic cars. There will even be a raffle with the prize being a 1974 VW Beetle!
There is plenty to keep everyone interested, including a lounge by the Arabian Gazelles – the region’s first ladies-only supercar club, where the members of the club will showcase their rides and events for kids including an augmented reality experience and a competition to draw the “Car of the Future”.

Trixie LohMirmand, Senior Vice President, Exhibitions & Events Management, Dubai World Trade Centre, said: “The 15th Dubai International Motor Show will once again be the platform that is at the forefront of the Middle East’s automotive transformation. This year attendees will witness future driving experiences and mobility technology that is reimagining the global automotive industry. With the motoring industry in the midst of major technology disruption, Dubai is the city where the Middle East will see this come to life.”