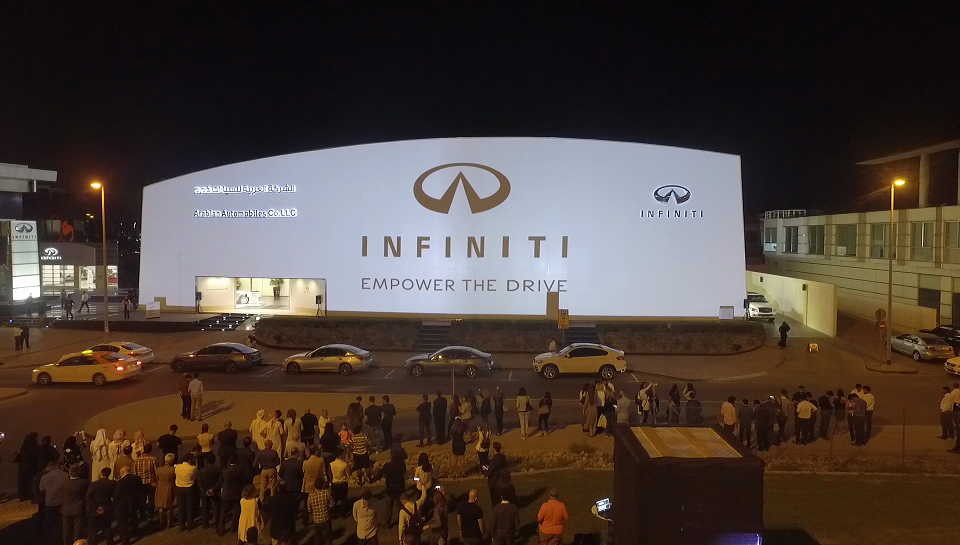 Arabian Automobiles Company, which is the flagship company of the AW Rostamani Group and the sole dealer for INFINITI in Dubai, Sharjah and the Northern Emirates, recently unveiled the largest video billboard in the region. The billboard showcases the all-new, performance-oriented Q50s Red Sport 400.

The billboard uses a combination of three-dimensional technology with localized video mapping, which is a world first and in keeping with the tagline of Infiniti ‘Unleash Your Potential’, highlights the brands spirit of innovation through the inspirational stories of individuals who have realized their potential to the fullest. The elements of their aspirational stories are used to highlight the features of the car like the obvious links between a weightlifter’s strength and the power of the model’s 3.0L Twin-Turbo 400HP engine.

Speaking about the billboard, Salah Yamout, Director of Sales and Marketing at Arabian Automobiles Company said that Arabian Automobiles has always been inclined to adopt leading technological trends in keeping with the development of the digital age. The new three-dimensional video billboard highlighting the all-new Q50s Red Sport 400, and the use of storytellers to showcase the importance of innovation associated with the brand is definitely a creative concept to demonstrate the full range and capability of the car.

Other creative visual metaphors that are used on the billboard include the precision and discipline displayed through aerial silk acrobat, Amani Stevens’ performance, in order to emphasize the coverage provided by the 3600 Around View Monitor. The video also features GCC B-Boy Champion; Christopher Frostyle, whose aptitude and finesse are linked to the intellect and adaptive steering control in the all-new Q50s Red Sport 400.

Members of the public have been invited to take part in Infiniti’s ‘Unleash Your Potential’ campaign by uploading fun and engaging videos to express their individuality through the means of the concept.