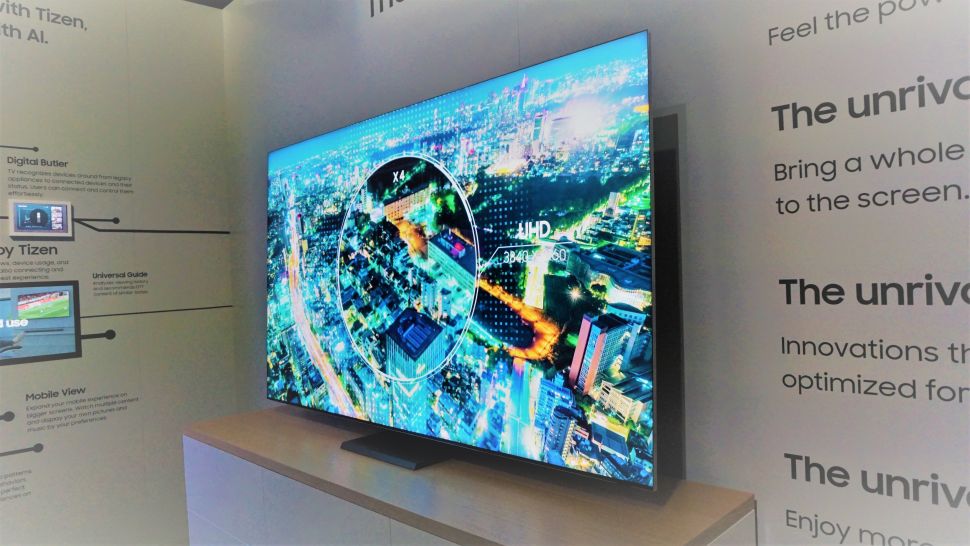 The Samsung Q950TS OLED television is most notable for its 2.3 mm mm bezel. The image on the screen seems to appear out of thin air, justifying the Infinity name and providing viewers with a more immersive experience. The scree-to-body ratio is an impressive 99 percent.

The design is highly striking even when viewed from the side due to the television’s grille-finish metallic side panels and an impressively smooth rear.

Though as of now there is no content that can match the 8K resolution, the television’s AI “quantum processor” can upscale any source to 8K and teach itself algorithms to improve the picture. The AI ScaleNet technology has the capability to compress an 8K source to 4K and stream the image over the internet. The AI processor can then upscale the image back to 8K. Other notable features include a “digital butler” that can control hardware over Bluetooth and Wi-Fi, the ability to mirror content from mobile devices, and support for Bixby, Google Assistant, and Amazon Alexa.

When it comes to the audio, the television’s Object Tracking Sound Plus technology is used to move the audio based on what is occurring on the screen lending the entire experience a more realistic effect. The Q-Symphony feature combines the TV’s speakers with compatible soundbars to further enhance audio quality. The Active Voice Amplifier boosts the sound when the TV detects higher-than-usual ambient noise.

The Samsung Q950TS is one of the first Samsung TVs that integrates with Samsung Health, allowing users to keep tabs on “key wellness metrics” like calories burned, weight and glucose levels by sharing information from your Samsung smartphone to your TV.
Samsung says the TV will be available as 65-inch, 75-inch and 85-inch versions.