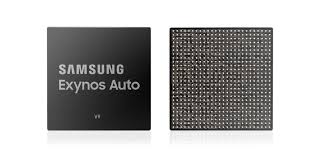 Audi to Use Samsungs First Processor for Auto Industry

Samsung Electronics has announced that Audi will be using its first automotive-branded processor, Exynos Auto V9, to power its next-generation in-vehicle infotainment (IVI) system. The IVI system is expected to make its debut in 2021.

Exynos Auto V9 is a powerful automotive processor that has been developed for top notch IVI systems that display content on multiple displays. These displays provide motorists with information that that they can use to enjoy a ride that is safer and more enjoyable. The V9 processor is based on 8-nanometer (nm) process technology, and comes with ARM’s latest Cortex-A76 CPU cores, ARM Mali G76 GPU, premium HiFi 4 audio digital signal processor (DSP), intelligent neural processing unit (NPU), and a safety island core to support Automotive Safety Integrity Level (ASIL)-B standards. The processor also supports fast and power-efficient LPDDR4 and LPDDR5 DRAM.

Commenting on the use of Samsung’s processor, Alfons Pfaller, head of Architecture and Platform Development E/E (Electric/Electronic) at Audi said that Samsung has been a key technology partner over the past few years and the company was pleased to have the Exynos Auto V9 power its next-generation platform which is expected to shape the future in-vehicle infotainment experiences.

He went on to add that the company was thrilled to launch the new Exynos Auto range of products, of which Exynos Auto V9 is the first product. The range will bring powerful processing performance to the next generation of automotive in-vehicle infotainment systems while confirming to the industry’s strict reliability requirements.

Exynos Auto V9 can support up to six displays and twelve camera connections for various sub-system content in premium IVI systems. The V9 derives its power from eight Cortex-A76 cores at speeds up to 2.1 gigahertz (GHz).

The GPU is arranged in three separate dedicated sets of Mali G76 GPU cores which can seamlessly support multiple systems like the cluster display, central information display (CID) and rear-seat entertainment (RSE) simultaneously. The chip also has four HiFi 4 audio processors for premium audio quality so that the audio experiences are of outstanding quality with vivid and realistic sounds.

The V9 also comes with an NPU for a digital concierge service that can intelligently manage a safe and personalized driving environment. With incredibly fast operations, the NPU can process visual and audio data for features such as face, speech or gesture recognition.