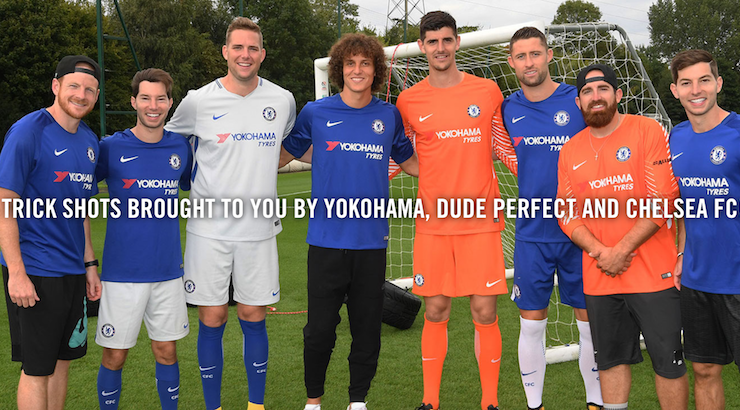 Yokohama has made a new video featuring football stars from Chelsea FC and the American YouTube sensations Dude Perfect to boost brand awareness. In the video posted on YouTube and the company’s social media channels, several players from the Chelsea football team and the Dude Perfect YouTube footballers come together to perform stunts like the Bounce Back Banker, Goalie Goal, Three-Point Header and Smoke Show Gonger using tyres from Yokohama. These stunts showcase the players’ skills.

Yokohama is the official tyre sponsor of the renowned English football team, Chelsea FC, who are the Premier League champions. The Dude Perfect team is known all over the world for their sports tricks and stunts. The US based team travelled to UK along with the team from Yokohama to Chelsea’s training ground in Cobham.

The video has already received more than 11 million views since it was posted online. The Chelsea FC players who participated in the shooting of the video include Álvaro Morata, Marcos Alonso, Gary Cahill and Thibaut Courtois who teamed up with the Dude Perfect team to dazzle viewers with their football tricks and shots.

Commenting on the video, Alan Holtschneider, Yokohama Tire Corporation’s director of marketing said that the team had a good time working with the highly talented and exuberant Dude Perfect team. The Chelsea FC players brought to the video their very own brand of skill and precision to make the video truly perfect

Coby Cotton of DudePerfect said, “Working with great organizations like Yokohama and Chelsea FC was really cool. A shout out to the Chelsea players for being such good sports and helping create another classic Dude Perfect video.”

Holtschneider said that the Dude Perfect video was a highly entertaining way to highlight the company’s global partnership with Chelsea FC and to reach new audiences.