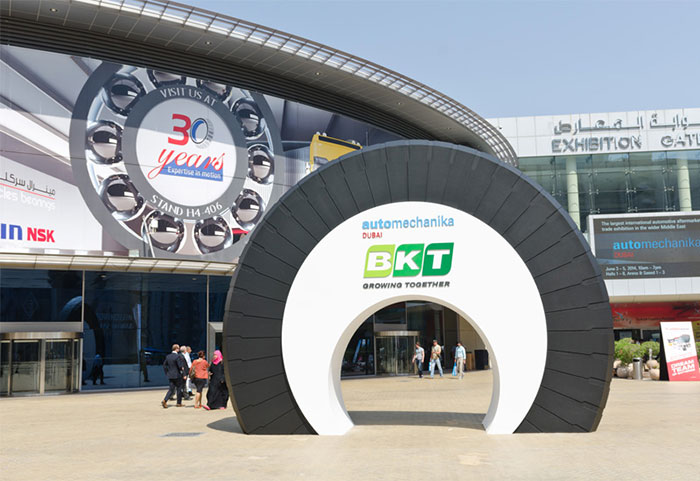 Tires and Batteries to Take Centerstage at Automechanika Dubai 2016

Automechanika Dubai, the most important automotive aftermarket show in the region which is scheduled to begin on Sunday will showcase the growing importance of Dubai’s USD2.76 billion worth of trade in the tires and batteries sectors. These two sectors will have a record number of exhibitors at the three day show, with a total of 220 global manufacturers of tire and battery-related products participating in the show, taking up 7,300sqm of exhibition space. The three-day exhibition will be held from 8-10 May at the Dubai International Convention and Exhibition Centre and is organized by Messe Frankfurt Middle East.

According to the organizer, the number of exhibitors from the tires and battery sectors has increased by 15 per cent on a year-on-year basis when compared to 2015 figures with the exhibition space increasing by 19 per cent. This increase in both the number of exhibitors and the floor space highlights the robust state of the trade in tires and batteries in Dubai. Statistics released by Dubai Customs indicate that Dubai imported, exported and re-exported USD 2.76 billion worth of batteries, and tires for commercial and passenger vehicles in 2014, which accounted for 22 per cent of Dubai’s USD 12 billion total auto parts trade during the year.

Commenting on the figures, Ahmed Pauwels, CEO of Messe Frankfurt Middle East said tires and Batteries has proven to be one of the remarkable success stories at Automechanika Dubai, and has exhibited significant growth, especially over the past few years. He expecrts demand to pick up pace when it comes to the regional automotive aftermarket and confirmed that some of the biggest global brands would be showcasing their latest tire and battery-related products at Automechanika Dubai 2016.

This growth in the Tires and Batteries section is worth mentioning in light of the fact that the global Automechanika brand recently signed on as a partner of the Reifen show in Germany, which is the top tire trade show in the world. As an outcome of the deal, for the first time, Reifen will be held concurrently with Automechanika Frankfurt in September 2018, and the partnership will in time, be extended to cover Automechanika’s entire network of 15 trade fairs in 14 countries across the world.

Automechanika Dubai 2016 will feature numerous leading brands in the automotive aftermarket who are seeking to establish and strengthen their presence in the region. These include Diamond Sponsor and Official Tire Partner BKT from India, which will use the show as the platform to launch its latest series of tires in the All Steel OTR (off-the-road) segment. These tires are specifically targeted toward the port, construction, earthmoving, and materials handling sectors.

Rajiv Poddar, Joint Managing Director at BKT, said: “BKT operates in the ‘Off Highway’ segment where there is an on-going requirement of new sizes and patterns for various applications. Due to this, product development is at the forefront in BKT and Automechanika Dubai provides an excellent platform to showcase our new range being developed specifically for Middle East market.”

Martins Industries from Canada, only tire equipment and racking manufacturer in the world that sells directly to the end user is another company that will have a strong presence at Automechanika Dubai 2016.

Speaking about his firm’s participation, Martin Depelteau, Vice President of Sales and Development at Martins Industries said, “Automechanika Dubai has brought us over the last few years some large tire racking projects with customers in several Middle East countries.” He went on to add that Martins Induistries will be returning to the show this year with its high quality tire storage racking as well as tire handling equipment which prevent the possibility of back injuries, especially when working with larger, heavier tires. The company is also offering a free warehouse layout service to help buyers to maximize usage of their storage space in a safe and efficient manner.