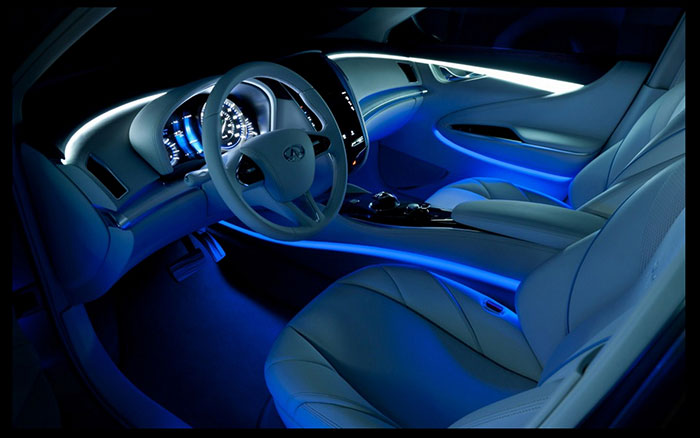 Dawn and dusk are said to be the two most hazardous times of day for drivers. As shadows shrink and lengthen in the early and late light, driver safety is greatly influenced by light—both inside and outside the vehicle. Advancements in exterior lighting, radar, and lidar-based detection, as well as advancements in street lights, are key factors have enhanced the safety record of automobiles. In recent times, the automotive has industry turned its attention to the equally complex aspects of in-cabin lighting. The advent of LED lights has increased the number of in-cabin light sources, allowing new technologies such as ambient and variable cabin lighting, a factor that has safety as well as aesthetic implications.

An experimental research study by the Transportation Research Institute at The University of Michigan reveals that reflected light and veiled reflected light such as is seen in a car cabin has a significant effect on visibility and on-road safety. Findings by the University of Michigan have been corroborated by research by the Lighting Engineering Group at the Ilmenau University of Technology in collaboration with BMW, Germany. The German group has further studied the effect of ambient LED-powered cabin lights on drivers, testing twelve different lighting configurations of varying positions, luminance, and colors. The conclusions of the study indicate that a luminance of less than 1 cd/m2 can improve a driver’s focus on the road. Other positive effects observed were the improved safety, alertness, and perceptional safety. American auto giant Ford has also pioneered the use of a patented LED lighting scheme called ‘Crystal Diamond Light’ that uses a miniature LED fixture to provide a broader spectrum of ambient light that is designed to improve the driver’s mood and efficiency. This new lighting system was introduced as a feature of the F-150 and the 2016 Ford Fusion. Ford’s research has also revealed that the color of the lighting plays a pivotal role in how a driver’s brain responds to the ambient lighting. Consequently, most ambient cabin lights use the color blue because colors such as red and green create an unfavorable response among drivers, and a best associated with a warning or alert signals. Ambient lighting is also influencing the materials used inside the cabin in order to improve a driver’s ability to find auxiliary controls such as indicators or navigation screens.

Once the sole domain of ultra-luxury cars, ambient lighting based on sophisticated LED arrays is now being transitioned to commercial models. Lighting is expected to become one of the key visual differentiators and an integral part of a car’s brand identity. However, contrary to popular opinion, so far, color has not been proven to be a significant influence on a driver’s emotional state. Although aftermarket lighting systems are able to offer mood lighting for car cabins, the economical use of LEDs is leading manufacturers to invest in the development of adaptive cabin lighting that can change to mirror the number of occupants and other events such as the time of day, the music being played. Vehicle safety component manufacturer Federal-Mogul has developed several custom interior lighting systems that are far more compact and uses a proprietary focusing system to improve homogeneity. The system is also expected to be installed on production models with gesture control, an additional capability.