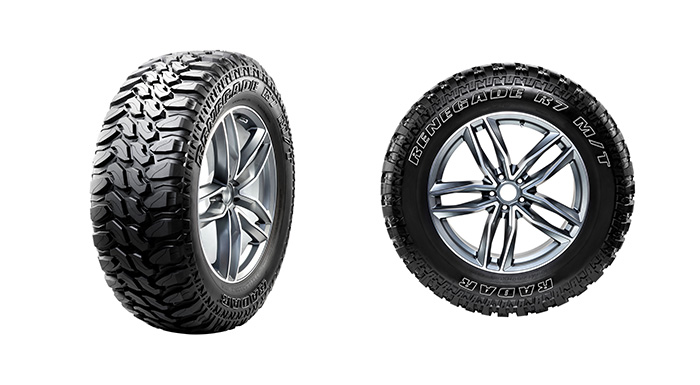 Omni United has added a new tire named the Renegade R7 M/T to its current Mud Terrain range. The new tire has been introduced in 9 sizes and this takes the total number of sizes in this range to 23 Outline White Letter (OWL) sizes. This range is compatible with most light trucks and SUVs and can be used for vehicles that have lift-kits.

The Renegade R7 M/T is meant for the serious off-roader. It not only looks good when it comes to toughness and ruggedness but is also an outstanding performer when it comes to handling terrains that comprise rocks, mud or harsh gravel. Irrespective of whether it is used on sand, snow or deep mud, it delivers high levels of traction. Omni’s mud terrain range was launched in September 2015 and is the outcome of the company’s longstanding participation in off-road motorsports and years of research and development.

One of the tire’s distinctive features is its BAJA race inspired Stone-Ejector-Technology. The tires come with a raised nub between the tread blocks. This nub actively deforms while the tire is running – opening, closing and then releasing as the tire goes through the contact patch. This maximizes the tire’s ability to eject stones. The company’s engineers simulated several models of stone trapping and drilling, and a review of traditional stone ejectors found that many current tires use features that only add more gauge in the tread groove with no active mechanism to reject stones.

Another notable feature of the tire, particularly, when it comes to the value segment, is the tire’s 3 ply construction. The third layer of protection makes the tire stronger and stiffer, thus reducing the risk of punctures in the sidewall and tread areas. Another feature that was inspired by motorsports is the upper shoulder side-biters which serve to give the tire higher traction in loose surface conditions and also give the tire a rugged look that is highly in demand among truck owners.

“The R7 offers a unique value proposition of a rugged design and high durability at a value price point. We will continue to expand this range so that we can make this tire available to as many enthusiasts as possible.” said GS Sareen, founder and CEO, Omni United.

With the new tire being offered in nine sizes and an additional 7 sizes scheduled to reach the retail level in December 2016, the range will have 30 sizes by the end of the year.