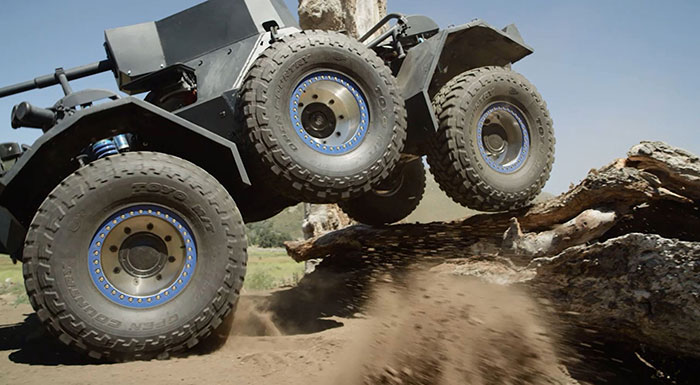 Toyo Tires has gone into marketing overdrive to showcase the company’s Open Country tires. The Japanese company created a supervehicle named ‘The Ferret’ and filmed a video with off-road driver and world champion BJ Baldwin behind the vehicle’s wheel, to demonstrate the ability of its Open Country tires to tackle any sort of terrain with flair. In the action-filled video, Baldwin drives “The Ferret” across a wide range of challenging environments including deserts, forests and water and the tires help the vehicle to take on even apparently impossible obstacles with relative ease.

Toyo collaborated with Action Vehicles Engineering to fashion ‘The Ferret’ from a 1959 British Ferret 4X4 military scout vehicle. The vehicle was modified heavily with the Rolls-Royce inline-six engine being replaced by Chevrolet LS V-8 engine and the chassis was modified to add King suspension parts that give the vehicle high clearance for rocky ground. Six huge Toyo Open Country tires were mounted on custom wheels, of which are powered by internal hydraulic motors that can be raised or lowered to give the vehicle extra traction on rough surfaces. The cannon turret attachment was replaced by a grappling hook that is paired with a winch.

A champion driver like BJ Baldwin is indeed the right fit for “the Ferrett” as he puts the vehicle through its paces in the video. The video has already received over 100,000 views on YouTube.