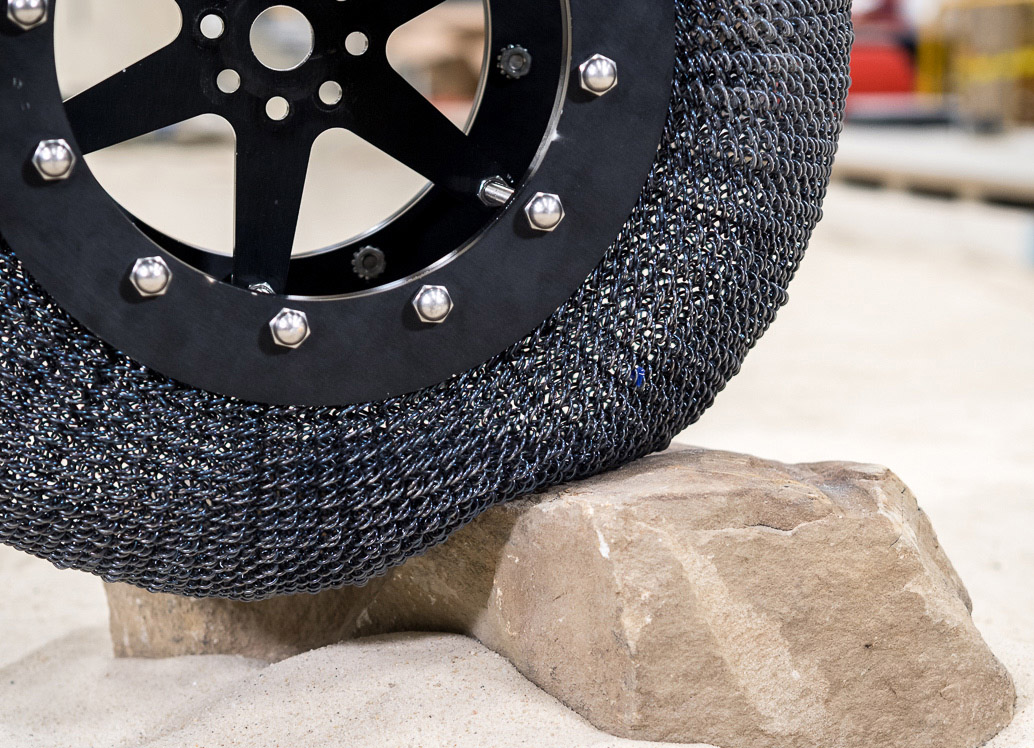 The research team at NASA’s Glenn research Centre is offering a non-pneumatic tyre for licensing to tyre manufacturers as part of its technology transfer program.

The tyre which is termed as a “superelastic” tyre was conceptualized as a suitable product for future expeditions to Mars missions. It does however have several technological innovations that make it a good alternative to pneumatic tyres. This tyre represents the latest version of the spring tyre which was invented by NASA Glenn and Goodyear. It is inspired by the Apollo lunar tyres.

One notable feature of the “Superelastic” tyre is its use of “shape memory alloys” instead of elastic materials to tolerate high strain as load bearing components. Thus, the tyre has the capability to withstand excessive deformation without much damage being caused on a permanent basis. The load carrying capacity of the tyre is also greater as it uses shape memory alloy as radial stiffening elements. The superelastic tyre offers as much or even more traction than conventional pneumatic tyres. There is no possibility of puncture, thus improving the safety factor.

This tyre could be used in cars, aircraft, all-terrain vehicles, military vehicles, construction vehicles, heavy equipment and agricultural vehicles.
The tyre’s shape memory alloys have the ability to undergo considerable reversible strain (up to 10 per cent). Hence it is better in this regard than other non-pneumatic tyres. The Glenn Superelastic Tire can also be made to soften with increased deflection, thus reducing the amount of energy that is transferred to the vehicle when there is an event that causes high deformation.

The use of shape memory alloys in the form of radial stiffeners instead of springs, further enhances the load carrying potential and design flexibility of the tyre. In the case of off-road applications, this kind of tyre gives greater leeway for increased travel speeds.