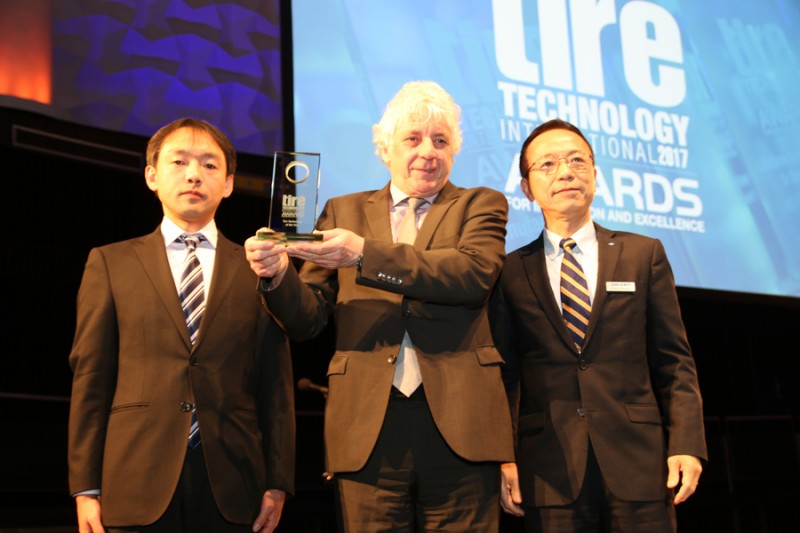 Falken, one of Sumitomo Rubber Industries brands recently won the Tire Technology of the Year Award at the annual awards for innovation and excellence.

The Tire Technology International Awards for Innovation and Excellence are the prestigious awards in the world in the field of tire development and manufacturing. The awards are presented in five main categories after judging by a panel of independent international experts in the field.

According to Falken, the use of Advanced 4D Nano Design technology has contributed to improved traction and wear life as well as a significant reduction in the rolling resistance of the tire. Falken has used this technology in its Azenis FK543 Runflat and the latest tires that have been added to its range of tires for commercial vehicles like the Linam VAN01, Eurowinter VAN01 as well as tires for regional traffic like the RI 151 and the BI 851.

Sumitomo Rubber Industries is the sixth largest tire manufacturer in the world and the company’s Advanced 4D Nano Design allows engineers to develop highly realistic simulations of the complex internal structures and behaviors of rubber materials across multiple scales of magnitude simultaneously. The technology involves the use of the combined capabilities of the Spring-8 synchrotron radiation facility, in order to analyze the internal structure of rubber; the J-PARC Proton Accelerator and Experimental Facility, to analyze the behavior of molecules and of the K computer, which is a thousand times more powerful than typical supercomputers. The SRI-patented Advanced 4D Nano Design technology thus facilitates more accurate predictions of the behavior of rubber material with respect to the three main but contradictory performance traits: grip, fuel efficiency and wear resistance.

This year, Kozaburo Nakaseko, senior executive officer of Sumitomo Rubber Industries received the award on behalf of the company. Commenting on the award, he said that the company has made great progress when it comes to material innovation and the development of new manufacturing processes. This led to the development of high-performance tires like the Falken Ecorun A-A, which achieved the maximum possible A-A ranking under Europe’s tire labelling system, as well as durable, long-lasting performance technology.

This also marked the first time that the company used advanced research facilities like super photon science and a world-class supercomputer for ongoing structural analysis of rubber materials. Using such sophisticated technologies will help the company understand internal structures and phenomena of rubber in greater detail so that it can develop more tires that will provide added value to customers.

Graham Heeps, editor of Tire Technology International and chairman of the judging panel, said: “With advances such as purified natural rubber and detailed simulation of the tire’s complex chemistry, experts at SRI have established an enviable reputation in tire technology in the past few years. Advanced 4D Nano Design pushes the boundaries of tire science: it sheds new light on how materials interact and opens the door to improved performance and new material developments. I can’t wait to see what they come up with next.”

For the presentation of the award, Nakaseko was joined on stage by Dr Masato Naito, manager of research and development headquarters at Sumitomo Rubber Industries, and Dr Bernd Löwenhaupt, managing director of Sumitomo Rubber Europe GmbH.