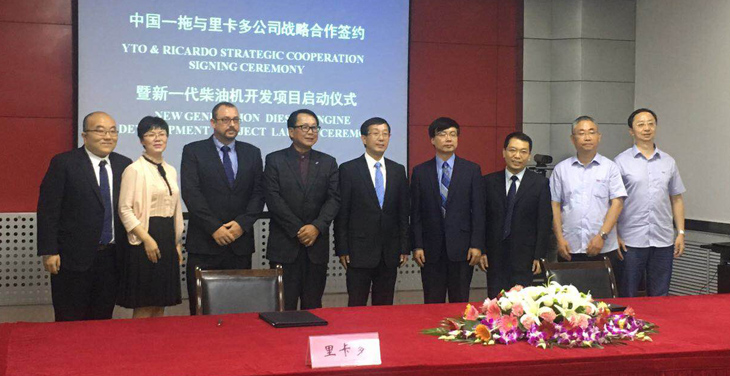 Ricardo has announced that the company will be developing a new range of advanced four and six-cylinder diesel engines for the Chinese YTO Group. The two companies will collaborate on the clean sheet design for the new range of engines which will be notable for the employment of the latest combustions and emissions reduction technologies. These technologies will include the highly successful Ricardo TVCS and the goal of developing this new range of engines is to deliver best-in-class performance and fuel consumption.

The all-new engine will be used as the successor of the current LR105 series, which Ricardo had developed in 1980 and has become one of the most successful vehicle engines used for agricultural vehicles in China, with annual production volumes crossing 100,000. The new engine family is slated to be launched in the Chinese market in the 2020s, and variants of the new engine will be used in YTO vehicles including tractors, harvesters, and many other off-highway machines. In addition to lending support for the design of both four- and six-cylinder variants of the new engine, Ricardo will be in charge of calibration and mechanical development testing of the engines at YTO’s engineering facilities in China.

Commenting on the collaboration, Ricardo Asia president Gary Tan said that the company was exremely pleased to be chosen by YTO to support the design and development of this important new engine family. He added that the new engine is meant to provide best-in-class performance and fuel consumption while achieving the latest China Stage V emissions regulations. He concluded y expressing his confidence that the new engine would prove to be a worthy successor to its predecessor, which the YTO Group had designed in collaboration with Ricardo and which had proved to be one of China’s most successful agricultural power products.