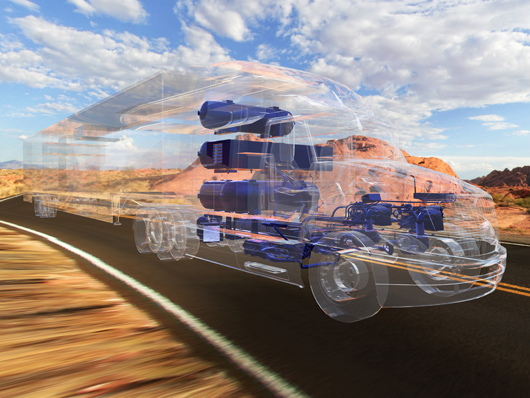 Ricardo is teaming up with Toyota’ for ‘Project Portal’, a project which involves designing a heavy-duty hydrogen fuel cell system for class 8 trucks at the Ports of Los Angeles and Long Beach. Ricardo has collaborated with Toyota when it comes to many technical aspects of the project including design, vehicle build, testing and development. Currently, the vehicles developed as part of the project are being tested.

Project Portal is Toyota’s next step in its bid to increase the range of zero-emission fuel cell technology to cover more sectors. It is a fully functional heavy duty class 8 truck which has enough power and torque capacity to conduct port drayage operations. The only byproduct is water vapor. When it comes to the San Pedro Bay ports, heavy duty vehicles account for a significant percentage of the annual emissions output and “Project Portal” may result in a vehicle that can help to further reduce emissions.

Ricardo worked with Toyota on many engineering functions including systems integration and packaging, fuel cells, power electronics, hydrogen tanks, cooling systems, batteries, electric motors and transmission. Even many ancillary systems like the HVAC system, power steering and air compressor which generally run on engine power were electrified, and the controls of these needed needed to be integrated into the vehicle’s J1939 CAN BUS.

The Project Portal platform has been designed to produce enough performance needed for supporting port drayage operations. The truck has an output of over 670 horsepower and 1325 pound feet of torque from two Mirai fuel cell stacks and a 12kWh battery. The battery is comparatively small in view of the fact that it has to support class 8 load operations. The concept vehicle’s gross combined weight capacity is 80,000 lbs., and it has an estimated driving range exceeding 200 miles per fill, under normal drayage operation.

Commenting on the collaboration, Chris Brockbank, VP of Vehicle Engineering at Ricardo said “Ricardo was honored to collaborate with Toyota on this high profile fuel cell demonstration project. He added that normally, heavy duty trucks are not as readily amenable to the kinds of electrification used for passenger cars and other light duty vehicles, in view of the size and cost of the required battery systems. Project Portal will provide customers with a further, practical option for a heavy truck ZEV application.

He concluded, “We look forward to working with Toyota in the completion of the in-port trials, and to seeing the results of the project which, I believe, may well inform the future vision of heavy duty transportation.”