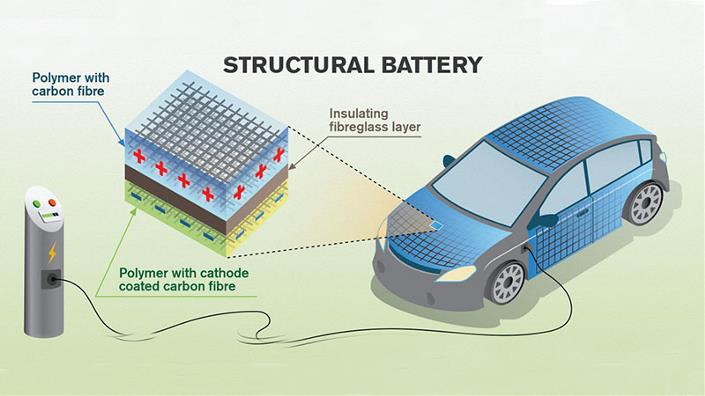 Researchers in Sweden have proved that it is possible to use carbon fibers as battery electrodes, making it possible for them to store energy. This opens up the possibility that that instead of having large batteries which need to be fitted inside the vehicle to power the engine, the body of the car itself could act as a source of power and store energy directly if it is made of carbon fiber. This would help manufacturers of electric vehicles to make such vehicles a lot lighter and save space by making energy storage an integral part of the structure of the vehicle.

Leif Asp, a professor of material and computational mechanics at Chalmers University of Technology, who was closely involved in the research explained that based on this premise, a car body would not just perform the function of carrying cargo, but would also act as a battery. The carbon fiber can also be used for other purposes such as harvesting kinetic energy, for acting as sensors or for conducting both energy and data. In the event that the carbon fiber can perform all these functions, it would be possible to reduce the weight of a vehicle or aircraft by up to 50%.

“We now know how multifunctional carbon fibers should be manufactured to attain a high energy storage capacity, while also ensuring sufficient stiffness,” Asp said. He said that in the case of cars, a slight reduction stiffness is not an issue. Currently, expensive carbon-fiber composites are used and their stiffness is of the level needed for use in aircraft. There is hence some scope to optimize the carbon fiber for use as energy storage components. The kind of carbon fiber having good electrochemical properties still have a stiffness which is higher than that of steel, while those with poorer electrochemical properties were twice as rigid.

The research team is now working with both automotive and aerospace industries, on coming up with the optimal carbon fiber that would have the right balance of stiffness and electrochemical properties so that it can be used as a battery..

“The key is to optimize vehicles at system level – based on the weight, strength, stiffness and electrochemical properties,” said Asp. He said that while structural batteries may not be as efficient as conventional batteries, it would still be possible to make very large gains can be made at system level due to their load-bearing capability.