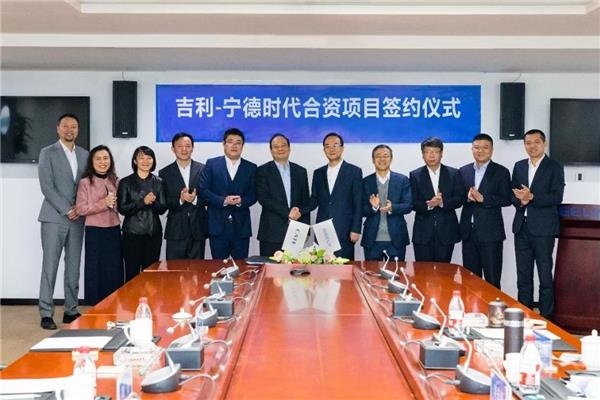 The two companies will jointly provide the capital of RMB 1 billion needed for setting up the new joint venture company, in which Geely Auto will hold a 49 percent stake and CATL will hold a 51 percent stake. The partnership has been spurred by the growing demand new energy vehicles in China, and the new JV company will play the key role of ensuring the stable supply of high-performance components for Geely Auto’s next wave of electrified vehicles. Geely will benefit from a lower procurement price for core components, and will also become more competitive when it comes to new energy and electrified vehicles.

Over these years, Geely Auto formed a strong value chain around the R&D and production of new energy vehicles. It sources core components coming from a wide range of reputed suppliers including Hengyuan, Viridi, CATL, Siemens, etc.
In November 2018, Geely Auto’s sales of pure electric and electrified vehicles exceeded 10,000 units, thus increasing by 31 percent when compared to the figure for the previous year. By 2020, Geely Auto plans to launch almost 40 new energy and electrified models, and it plans to offer these new models offering higher levels of performance at competitive prices by working together with strategic partners like CATL.

An Conghui, President of Zhejiang Geely Holding Group and President and CEO of Geely Auto Group, said: “New energy vehicles are a quickly emerging strategic segment in the industry. Geely Auto will work together with partners such as CATL to build a global industrial value chain, become the global leader in new energy and energy-efficient technologies, and continue to create high-value, high-quality new energy and electrified products and services for customers. We aim to reach our 2020 strategic goals in a socially responsible manner through independent innovation, global resource integration, and synergy promotion.”

CATL President and CEO, Zhou Jia said that CATL has always been focused on the customer, as part of its drive to provide its customers with products and services that are increasingly cost-effective, safe, and efficient.
Geely’s joint venture with CATL will effectively combine CATL battery technology with Geely Auto’s technical expertise in the field of new energy vehicles in order to expedite the development of lithium-ion batteries, and to make batteries that offer better design and are more efficient.

The China Association of Automobile Manufacturers has said that the production and sales of new energy vehicles in China in 2018 has reached 1.05 million and 1.03 million units respectively, representing an increase of 63.6 percent and 68 percent compared to figures for the previous year. With the government planning to lift subsidies soon for new energy vehicles in China, there will be greater focus on factors like cruising range, battery energy density, vehicle cost, and price will emerge.

With new partnerships like the one between CATL and Geely, China’s automotive industry is soon expected to transition from the low-end to the mid and high-end segment of the global automotive value chain.