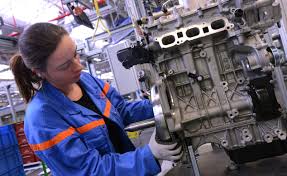 PSA Group Chairman Carlos Tavares formally marked the inauguration of the new assembly line for the 1.2L engine after the company invested USD 285 million in the facility. The PSA Group is already making the PureTech engine at its two facilities in Tremery and Douvrin in France and a third factory at Xiangyang in China.

The production of the engine at the Tychy plant will increase the production volume of the PureTech engine which has won the Engine of the Year accolade four times.

The PSA Group will expand the production of the PureTech engine even further when it commences manufacturing the engine at three more of its facilities across the globe – at the factory in Szentgotthard, Hungary; Kenitra, Morocco; and, from 2020, at the Hosur plant in India.

So far, PSA has made 3.8 million PureTech engines have been produced to date, and the additional capacity will help PSA to cater to the demand from the use of the engine in the group’s Opel/Vauxhall brands.

The PSA Group modernized its powertrain plant in Tychy with new technologies and equipment, as well as new IT systems. The factory is expected to produce 460,000 units to meet near-term demand. Logistics also have benefited from the relocation of component plants close to vehicle factories.