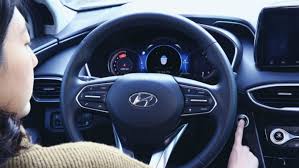 Hyundai has developed new fingerprint technology for keyless entry. The company says that using the new smart fingerprint technology, drivers of Hyundai models will be able to unlock their cars and to start their vehicles. All the driver has to do is place a finger on a sensor located on the door handle. The sensor can identify the encrypted fingerprint information after it is delivered to a fingerprint controller inside the vehicle. The vehicle can be started by touching the ignition button which is also equipped with a fingerprint scanning sensor. The technology will be first seen in the Santa Fe SUV which will be launched in select markets during the first quarter of 2019.

The technology also has the capability to provide a customized driving environment. By matching driver-preference information with fingerprint data, the vehicle can automatically adjust seating positions, connected-car features and side-view mirror angles.

“Hyundai Motor plans to further expand the application of the technology to allow the adjustment of temperature, steering-wheel position and many other features which will be tailored to drivers’ preferences,” Albert Biermann, head of Hyundai’s R&D Div., said in a statement.

Biermann said that Hyundai is addressing the security issues that use of the smart-fingerprint technology can cause. According to Hyundai, the technology efficiently prevents forgeries and use of faked fingerprints with capacitance recognition, which detects differentials in the electricity level in various parts of the fingertip.

The technology’s chance of misrecognizing another person’s fingerprint as the driver’s is one in 50,000. This makes it five times more effective than conventional vehicle keys, including smart keys. Through real-time learning, the fingerprint system can continually improve its success rate.