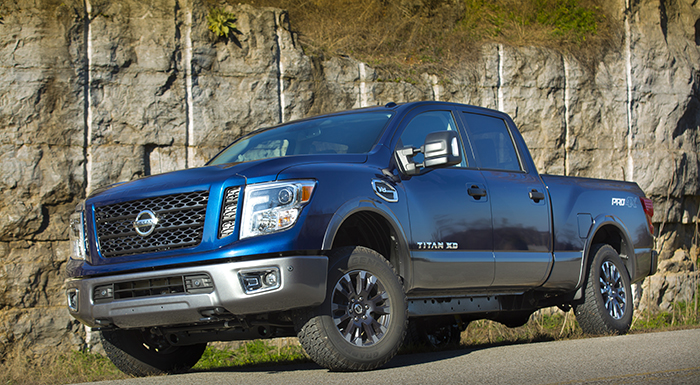 Nissan TITAN and TITAN XD to Have New V8 Engine

In a quest to complete the first stage of the “American TITAN” story, Nissan has announced that an all-new 5.6-liter Endurance V8 gasoline engine, assembled in Decherd, Tennessee will be equipped in the all-new TITAN and TITAN XD full-size pickup trucks.

The engine, which cranks out 390 horsepower at 5,800 rpm and 401 lb-ft of torque at 4,000 rpm, boasts four-valves per cylinder, Variable Valve Event & Lift (VVEL) and direct injection.

It is confirmed that the gas-powered engine will join the award-winning Cummins® 5.0L V8 Turbo Diesel in early spring next year to complete the engine offerings for the new Nissan XD full-size pickup, which stakes out a distinct position between standard light-duty and heavy-duty entries. The striking, new design represents the marriage of the capabilities of a heavy-duty hauler with the affordability and drivability of a light-duty pickup.

According to Rich Miller, chief product specialist, TITAN, Nissan North America, Inc., with the new engine, Nissan TITAN XD customers would get a chance to make the best choice for their towing and hauling needs–either the new Endurance V8 or the Cummins® diesel–two offerings that couldn’t be found on any other truck on the market today. “It’s going to be a tough decision for TITAN XD customers between these two very durable, capable engines.”

The new Endurance V8 shares its displacement with the previous-generation V8 installed in Titan, but that is where the similarities end. The new engine cranks out 390 horsepower (up from 317) and 401 lb-ft of torque (up from 385), along with Nissan’s highly revolutionary VVEL technology, which merges hydraulic-controlled variable valve timing and electronically controlled variable valve lift on the intake and exhaust sides to deliver crisp response and high performance. Throttle response is boosted by directly controlling the intake valve, rather than utilizing the conventional method of controlling intake with a throttle valve, and valve timing and opening with non-variable camshafts.

TITAN XD models fitted with the Endurance V8 engine will be outfitted with an all-new 7-speed automatic, which features Downshift Rev Matching and Adaptive Shift Control.

More details on the Endurance V8 and 7-speed automatic will be released closer to its on-sale date.