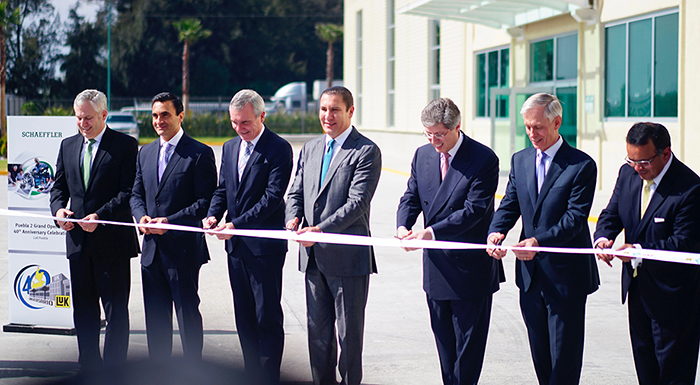 Apart from Schaeffler Mexico’s 40th anniversary celebration of its facility in Puebla, the company has also recently celebrated the launch of its second facility at the Huejotzingo location, also in the Mexican State of Puebla.

The newly opened facility specializes in the production of torque converters for US and Japanese automakers. With a production area of around 16,000 square meters, it boasts highly developed production equipment, a research and development center and in-house tool manufacturing. The facility will employ nearly 550 members of staff, and plans for its upcoming expansion are already underway.

Present during the inauguration of the new facility and the celebration of the 40th anniversary of the first-ever site in Puebla are Georg F. W. Schaeffler, Chairman of the Schaeffler AG Supervisory Board and shareholder of the Schaeffler Group, Rafael Moreno Valle, governor of the Mexican State of Puebla, and Carlos Alberto Morales Alvarez, mayor of Huejotzingo.

The first Schaeffler facility at the Puebla location was established four decades ago and has a production area of around 22,000 square meters. At this facility, 1,100 employees manufacture dual mass flywheels, actuators, double clutches, and clutch systems for a series of globally-operating automakers.

With the two facilities in Puebla, Schaeffler now has three production locations in Mexico. The company’s facility in Irapuato, which is in the Mexican State of Guanajuato, was founded in 2008 and supplies industrial companies and customers from the automotive industry in Mexico and North America with rolling bearings as well as products for engine systems and chassis applications.