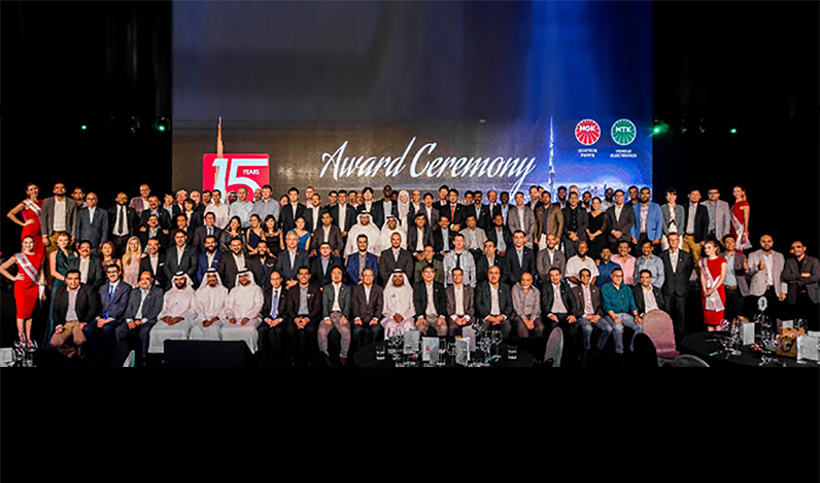 NGK Spark Plug Middle East celebrated its 15th anniversary in the region with a gala event that was held at the Armani Hotel in Burj Khalifa in Dubai which is billed as the tallest building in the world. NGK is one of the leading suppliers of ignition and sensor components at the global level for the automotive industry. The company supplies components to both OE and aftermarket customers spread across the customers. It has a product portfolio comprising spark plugs, glow plugs, ignition coils and ignition leads under the brand NGK Ignition Parts as well as mass air flow and manifold absolute pressure sensors, lambda sensors, exhaust gas temperature sensors and NOx sensors under the brand NTK Vehicle Electronics. NGK’s footprint spans all continents and it has 43 group companies, 24 production plants, and 5 technical centers.

NGK Middle East’s celebration of this milestone anniversary highlighted the company’s zeal to grow and strengthen its position as the leading ignition and sensor specialist in the region. The company initially set up base in the Middle East in 2000 with a liaison office in the Jebel Ali free Zone and just two employees. This presence has now grown into a warehouse covering 1,000 square meters in that caters to the Middle East, Africa and CIS countries as well as an office area that spans 12,000 square meters in JAFZA and oversees operations in 71 countries of Middle East, Africa, CIS and South Asia. The workforce has now expanded to 31 employees. The company aims to grow even further to retain its market leadership.

The anniversary event was attended by 140 guests comprising key customers from the region and senior officials of the company from Japan and other global subsidiaries.

The guests at the event were extended a warm welcome with a welcome speech by NGK ME MD Hideaki Nakashima. Shinichi Odo, President of NGK Global Head Quarter made the opening speech. Masaki Sumiya, Regional President, EMEA started off the event with a toast. Other eminent dignitaries who spoke at the event included the CEO of JAFZA, Mohammad Al Muallem and CEO of Arab Culturalist, Nasef Kayed.

The speeches were followed by an award ceremony in order to recognize the outstanding contributions of key customers:

Employees who had completed 10 years with the company were given due recognition and a round of applause.

The program concluded with a vote of thanks by the MD of NGK ME, an introduction of the Middle East Team members and a grand group photo session.