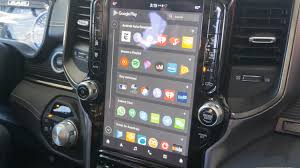 Google has completely revamped Android Auto and the new version, especially its interface is significantly better than the previous version. It has been revamped from scratch with the launcher now comprising a range of apps that can be chosen from a vertically scrolling interface instead of five buttons along the bottom. This is quite similar to the app drawer on conventional smartphones and makes it a lot easier to opt for the desired navigation or audio app. The launcher is more like Apple’s CarPlay now, though Car Play slides from page to page horizontally while the launcher of Android Auto scrolls vertically.

Another new feature is a new navigation bar at the bottom. This bar continues to remain on the screen and changes its function based on whatever app is being used at the time. So, if you are using Google Maps and listening to a podcast simultaneously, you would still be able to fast forward or rewind the podcast without exiting from the Google Maps app as the navigation bar has audio playback controls on it. If you are listening to music through an app while using android Auto for navigation, your next suggested driving direction stays on the screen on the bottom navigation bar. Driving is a less stressful as the need for inputs and taps for switching apps has decreased. The new version goes a long way towards minimizing distractions.

Other notable additions include a newly-designed notification center that makes it possible to view recent calls, listen to messages and see alerts. There’s also a new dark theme that makes the interface more attractive. Android Auto has also added wide-screen optimization for some of the extra wide displays seen in new models. Thus, the OS will be able to use all the possible area on the screen. Google has said that it would be rolling out the update to all Android Auto equipped cars this summer.