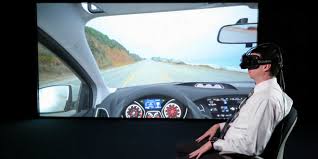 Ford had announced a few months ago that it had teamed up with London-based company Gravity Tech to use virtual reality technology for the design of cars in 3D. Ford has announced that this program will be expanded to its design offices across the globe.

According to Ford, many of its employees specializing in interior and exterior design across its five global Ford design studios are now tinkering with virtual reality technology while collaborating in real time. This collaboration is facilitated through a feature in the technology that was developed for Ford called Co-Creation. Using this feature, designers in different locations can simultaneously create, collaborate, evaluate and even walk around a 3D design in real time without leaving their individual work spaces.

While using the technology, designers give up their sketchbooks and pencils or rather, their computers for VR headsets and controllers, which have inbuilt motion-tracking technology that replicate the act of sketching with a pen and paper. Using the technology, multiple designers spread across different locations can draw, rotate, expand and compress and 3D sketch, as well as make changes in real time. The technology not only serves to enhance collaboration, but it also helps designers to save time and minimizes the need for travel during the development process. The conventional vehicle design process can be quite time consuming from the 2D sketch stage to 3D rendering phase and can take many weeks. Using the new virtual reality tool allows designers to totally bypass the 2D stage altogether and they can come up with more 3D representations for evaluation.

In addition to its facility in Dearborn, Ford will be using the technology at its design centers in Palo Alto, California; Melbourne, Australia; Dunton, U.K.; and Merkenich, Germany. The company is still in the process of testing the system but hopes that it will be able to use it soon for a production model.