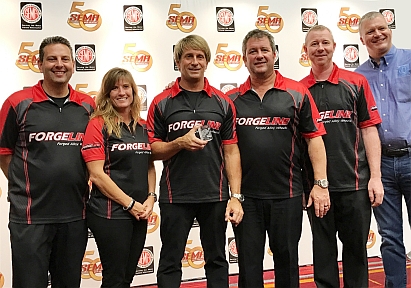 Forgeline Forges Ahead with Media Award at SEMA Show

Forgeline Motorsports made a definite impact at the recent 2016 edition of the Specialty Equipment Market Association (SEMA) Show in Las Vegas by winning the Global Media Award. The company won the award for its new Carbon+Forged Series wheels. These are two-piece carbon fiber and forged aluminum ultra-lightweight performance wheels that will be available at the retail level from January 2017. Forgeline thus joined a select group of companies whose products the judges believed are most likely to succeed. Almost 3,000 entries were received as entries for the SEMA Show’s New Products showcase. Each of the international mediapersons belonging to the jury was asked to select 10 products which they believed are most likely to interest their readership and succeed in their market.

Commenting on the award, David Schardt, president, Forgeline Motorsports said that he was deeply honored that Forgeline was selected from thousands of companies to receive the award by the international media judging team.

Forgeline’s new highly lightweight motorsport-inspired Carbon+Forged Series CF201 and CF202 wheels are currently available in 20- and 21-inch sizes and are have been specially designed to fit modern sports cars like the Ferrari 458/488, Acura NSX, Z06 Corvette, Audi R8, and the Lamborghini Huracán/Aventador models. The wheels can also be used for other high-performance models like BMW, Mercedes-Benz, Porsche 918/GT3/GT3RS as well as Aston Martin and McLaren vehicles.

The 20 x 9 Carbon+Forged Series wheel weighs only 16.5 pounds and the decrease in weight is chiefly due to the use of the carbon rim shell which when compared to aluminum rims is 40% lighter

The new Forgeline Carbon+Forged wheels are have been designed, engineered and tested to deliver industry-leading levels of impact and damage resistance, fatigue strength, and deflection stiffness. The robustness of these wheels has been proved through tests that were conducted by an independent automotive industry laboratory, in which they met and exceeded all existing SAE and TUV test specifications as well as the AK-LH 08 Radial Impact Test standard.