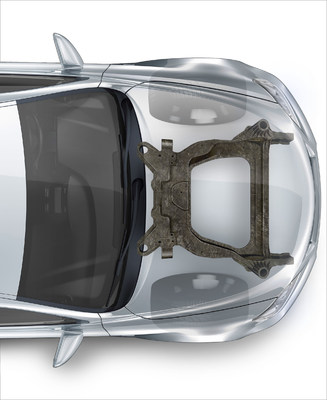 Ford has joined hands with Magna to work on carbon fiber subframes that can help optimize weight. The two companies have developed a prototype carbon fiber composite subframe, that they say weighs 34 percent less than conventional steel subframes.

The automotive industry is frantically seeking ways to cut weight as fuel efficiency and impact on the environment become key concerns. The new prototype developed by Ford and magna has emerged as a key solution that could pave the way for more efficient vehicles in the future.

Magna and Ford together analyzed the entire subframe assembly to identify components for which the weight could be reduced. They identified 45 such parts and in the prototype subframe, these 45 parts were replaced with just two molded and four metallic parts, leading to an 87 percent reduction in the number of parts that were used.

The subframe is a crucial part of the vehicle, serving as the base for the suspension, wheels, and engine of the vehicle. The strength of the subframe is also directly related to the crash worthiness of a vehicle and has a high impact on the safety of the occupants. With respect to these factors, the prototype design meets all the performance and safety norms based on a computer-aided engineering analysis.

Magna will carry out further tests to evaluate the bolt load retention, corrosion, and chipping. Later on, the team will work on making the prototype a viable design by coming up with an appropriate design, manufacturing, and assembly process.

Magna has already commenced production of the prototype subframes for its own testing. Ford will be independently carrying out its own component and vehicle-level testing.

With carbon fiber becoming less expensive, more and more companies will be using this material for manufacturing components for their vehicles and it is slowly expected to make a transition from supercars to the conventional sedan cars we see on the road on a daily basis.