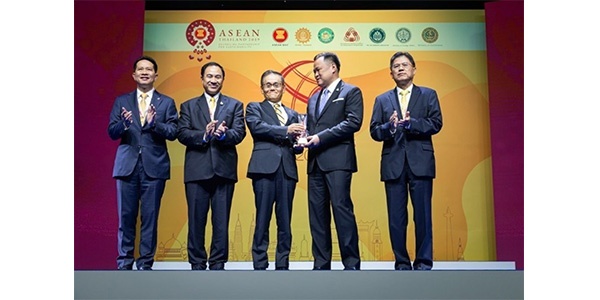 DENSO Corp.received the prestigious “Friend of ASEAN” award at the 2019 edition of the ASEAN Business Awards. The Japanese company was recognized for its effort in Lean Automation System Integrator (LASI) Project. The LASI Project was a collaboration project between Thailand and Japan for the purpose of development of “System Integrators” for Thailand’s Manufacturing Industry.

The Awards are the first of their kind in the region and were instituted by the ASEAN Business and Advisory Council (ASEAN-BAC) to acknowledge the contributions of companies who contributed the most to the region’s economic growth and prosperity. The Friend of ASEAN award is meant specifically to recognize non-ASEAN companies which have demonstrated a continuous and increased commitment within ASEAN community.

The Lean Automation System Integrator (LASI) Project was established in 2018, and was a joint project by the Ministry of Industry of Thailand (MOI) and its Ministry of Economy, Trade and Industry (METI) of Japan under Thailand’s 4.0 Policy. The project’s goal was to develop engineers who specialize in Robotics and Automation as system integrators for “Lean Automation.” Denso’s take on Lean Automation derived from the company’s 70 years of experience in automotive parts manufacturing and lean automation globally was used to produce over 100 system integrator graduates in Thailand.

CEO & President of DENSO International Asia Co. Ltd., Shingo Kuwamura, received the award on the company’s behalf the award at the gala dinner in the presence of H.E. Mr. Anutin Charnvirakul, deputy prime minister of the Thai Government at the gala event was held at Impact Exhibition Center in Bangkok, Thailand, on the sidelines of the ASEAN Summit.

DENSO is one of the largest global automotive suppliers of advanced technology, systems and components. The Japanese company first established its presence in Thailand with a manufacturing operation in 1972. It went on to expand its operations across eight ASEAN countries. DENSO has contributed actively to the growth and development of the ASEAN region through the key areas of auto parts manufacturing and research & development. Denso has also focused on the development of people and as part of its drive to continuously develop skilled human resources for the ASEAN region, DENSO set up the DENSO Training Academy (Thailand), its first overseas regional training center in Thailand. In May 2018, DENSO served as one of the main supporters for establishing the Lean Automation System Integrators (LASI) Learning Factory, near the Industrial Transformation Center (ITC) in Kluaynamthai, Bangkok.

As part of its effort to expand its presence in Thailand under the government project, it set up a second Lean Automation System Integrators (LASI) Learning Factory at Sumipol Institute of Manufacturing Technology (SIMTec) in Rayong at the center of the Eastern Economic Corridor (EEC) area.

Denso plans to continue to support ASEAN communities by leveraging its expertise to improve ASEAN manufacturing practice and productivity through the delivery of industrial solutions to factories, in areas like Factory Automation and Internet of Things (IoT), manufacturing technologies, and education of the locals in principles of “KAIZEN (continuous improvement)” practice, the core-value for manufacturing industry.