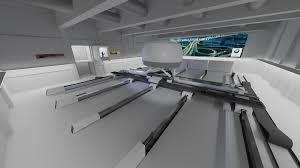 BMW will be investing 100 million euros to build what the company says is the most advanced driving simulation facility in the world. Located at its FIZ Research and Innovation Centre, Munich, the facility will be used for virtual testing of advanced assistance systems and display and control concepts for autonomous driving.
The Driving Simulation Center which will cover 11,400 square meters is being built in a central location on the FIZ site. It will have 14 simulators and usability labs and will have a workforce of 157 people when it becomes operational in 2020.

The simulators will include a high-dynamic simulator which can simultaneously represent longitudinal, transverse and rotational movements of a vehicle, thus generating acceleration forces of up to 1.0g. It will be used for testing new systems and functions for evasive maneuvers, full braking and hard acceleration. Another simulator which will have a motion area covering almost 400 square meters will be capable of providing high-fidelity simulations of scenarios like braking and accelerating whilst cornering, driving around a roundabout and a quick series of multiple turn-off maneuvers. Thus, it will now be possible to replicate complex urban driving scenarios in a realistic manner.

According to BMW, a driving simulator comprises a vehicle mock-up on a platform within a dome. Those using the simulator will see images projected onto a screen which synchronizes with the vehicle’s movements, complete with sound effects. This will facilitate testing of certain conditions and situations in a lab for the first time, as well as increased repetition and validation of tests. It would also be possible to replicate situations which cannot be safely created in real life on-road. More configurations can be tested at an earlier stage before on-road tests, as well as multiple or combined scenarios, and issues such as driver distraction from display and control systems.
The virtual test drives will be conducted by development engineers and professional test-drivers, but BMW is also mulling bringing in customers to help assess and analyze factors like usability and ‘real’ driver behavior.

The company said in a statement: “Long before the first mile of actual road driving has been performed, the new Driving Simulation Centre is able to indicate clearly how well a new system will stand up to the everyday reality of a vehicle’s life on the road.”