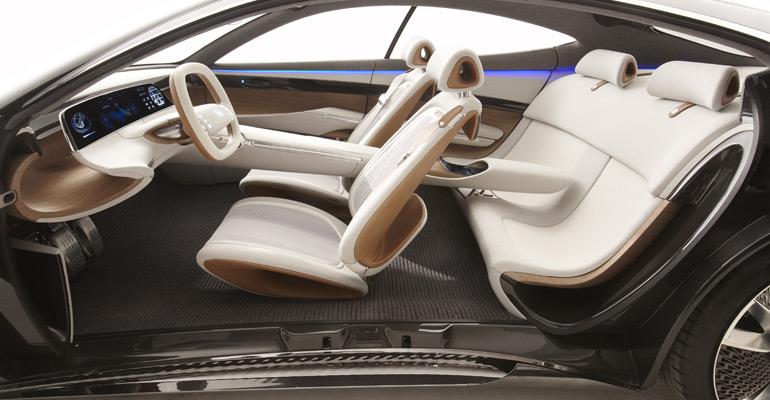 Hyundai showcased a new style in interiors with the Le Fil Rouge Concept that it launched recently. The company received accolades for the sleek exteriors and interesting interiors which are an amalgam of new shapes and appearances which are also easier to assemble from the manufacturing perspective.

During an interview at the Concours d’Elegance in Plymouth, MI, Hyundai Design’s Vice President of Styling SangYup Lee said that instead as the Le Fil Rouge is an all-electric vehicle, in the space that is normally used to accommodate the internal combustion engine, Hyundai fitted in the climate control system. So, it will not take up any more space in the cabin. This reduced the depth of the instrument panel. Hyundai used a two-way ventilation system instead of forced induction. This system blows air over the car’s tubular curved surfaces. The construction is lightweight thanks to the tube architecture and the tubes function as ducts which convey air to the backseat.

The design of this instrument panel is more production oriented as it eliminates the need for a robotic arm to lift and angle it into the cabin on an assembly line or for workers to push and bolt it in place like a conventional instrument panel. Hyundai also used unconventional materials like part wool fabric inside Le Fil Rouge. This perforated fabric that was used for the seats of the Le Fil Rouge Concept is 40 percent wool. The steering-wheel buttons are under fabric for a more ambient feel.

The design of the interiors is meant to make buyers connect more emotionally with their vehicles just like those who own Maseratis or Alfa Romeos do. The idea is to convey the feel of “sensuous sportiness” for Hyundai through a stylish combination of architecture, proportion, styling and technology.