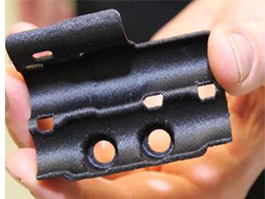 3 D printing will make it possible for the McLaren-Honda Formula One race team to design, modify and make parts at very short notice prior to the Bahrain Grand Prix which is scheduled to be held next week. The team has a Stratasys 3D printer on hand to make it possible to quickly modify and produce parts during practice sessions.

McLaren-Honda race cars have over the past few years, used a handful of small 3D-printed components. However, this will be the first year during which the team expects to print parts on site during race week. This will allow the engineers belonging to the team to try out new techniques and designs that can help reduce the weight of the car and improve its aerodynamic performance.

The 2017 McLaren-Honda MCL32 F1 car that the team will be using has several small plastic 3D parts including a hydraulic line bracket), a connection cable for a new communication system, carbon-fiber-composite brake cooling ducts and a rear wing flap.

It will take only four hours for the 3D printer to make a revised structural bracket for the hydraulic line. If the part is to be made using traditional manufacturing processes, it will take two weeks.

For the first time this year, the race car got a two-way communication and data system, but the first cable proved to be a distraction for the drivers. The McLaren-Honda engineers tried out three different designs fashioned from multiple materials which were made using the Stratasys 3D printer. They finally opted to use a rubber-like boot that joins the system’s harness wires.

Stratasys on its part will be using the F1 race as an event to test new 3D equipment and processes. Company officials have made it clear that they do not expect 3D printers to be cost-effective for high-volume applications for production vehicles for at least another five years.