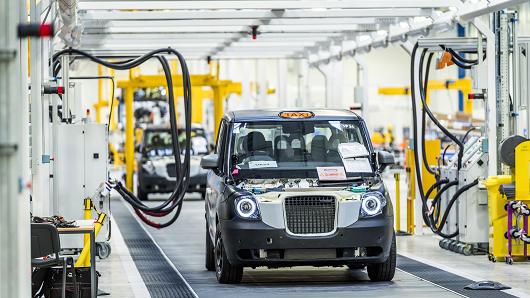 London is famous for its black cabs. In tune with the times though, these famous black cabs will go green. The London Taxi Company, a wholly owned subsidiary of Chinese car manufacturer, Geely has already set up a new GBP 300 million factory in central England which is slated to make 20,000 electric versions of the black cab.

The new-generation cab is part of the initiative to cut toxic emissions and to reduce operating costs of the fleet.

Speaking about the move, Chris Gubbey, chief executive of the LTC said in a press release that the move marked the rebirth of the London Taxi Company. The company is now being positioned as one having the vision to design and develop urban commercial vehicles which will not emit emissions and will significantly reduce operating costs for drivers across the world.

The new electric taxi will make its debut in London later on in the year and will be launched at the global level at the beginning of 2018.Geely

The London Taxi Company received support from the U.K. government to the tune of GBP 16.1 million. The funds were received Department for Business, Energy and Industrial Strategy.

Speaking about the government’s support for the project, Greg Clark business and energy secretary said in a statement that London’s black cabs are famous across the world and the government supported the project as part of its bid to make the UK a world leader when it comes to the development of innovative automotive technologies. The UK government has also announced an extra GBP 64 million in investment to promote the use of electric taxis. GBP 50 million of this amount will be used for a Plug-in Taxi Grant program while the balance GBP 14 million will be invested in setting up charging stations for electric taxis.

John Hayes, transport minister, said “This government is committed to improving air quality and reducing pollution in towns and cities, which is essential for people’s health and the environment.”