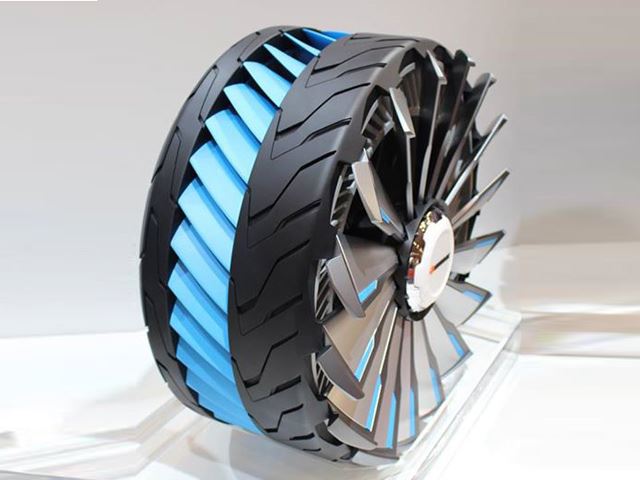 Hankook Develops Transforming Tire that can Change its Shape

Hankook Tire has released a video of its Transforming Tire, which the Korean tire maker developed through its Next Driving Lab project. The tire can change its shape based on the road conditions. This is the fourth such tire that has been developed through “The Next Driving Lab” that is meant to come up with futuristic tires that will be appropriate for use in the new era of mobility which will be characterized by innovations like more widespread use of electric and autonomous mobility and shared mobility. The tire further reinforces Hankook’s innovative brand value and leadership in the tire sector.

Designers began the design process by challenging the conventional stereotypes about tire shape, which have changed little since tires were first invented. Till now, different tires have only shown changes in terms of variation of tread and flatness ratio. The flatness ratio is the ratio of the sectional height and width of tires which varies based on the operational conditions, the performance requirements of the road surface and climate change.

Commenting on the Transforming Tire, Seungbin Lim, senior VP of the Hankook Tire marketing division said that the company’s successful Next Driving Lab campaign served as an opportunity to effectively convey the innovation DNA of Hankook Tire.

Hankook’s engineering team worked closely with Prof. Kyu-Jin Cho and the BioRobotics Lab from the Department of Mechanical and Aerospace Engineering at Seoul National University, which had emerged as the winner at the 2016 RoboSoft Grand Challenge. They developed a variable-type tire that can change its shape, so that it can offer motorists stable, high-speed driving on any road surface with a single tire.

‘The Next Driving Lab’ project is essentially a campaign of challenge and innovation with the tagline ‘Who Creates the Driving?’. The outcome of the first such campaign in 2013 was a ‘Digital Creative Car’ and subsequent campaigns produced the ‘Mind Reading Tire’ in 2014 and the ‘Ball Pin Tire’, which could move in a full 360-degree circle in 2015.