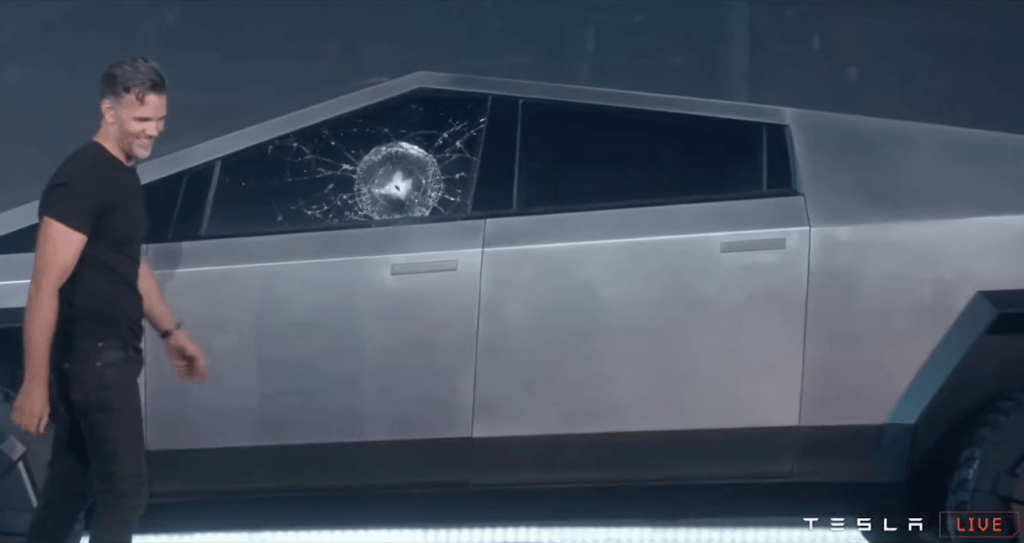 Tesla’s launch of its much awaited Cybertruck failed to go as planned when a demonstration held to showcase its “unbreakable” glass led to shattered windows. During the ceremony, which was held at the Tesla Design Centre and was livestreamed, the company’s CEO, Elon Musk asked lead designer, Franz von Holzhausen, to throw a baseball-sized ball made of solid metal, saying that the car was “bulletproof” against even a 9mm handgun. This was meant to demonstrate that the “Armor Glass” used for making the windows was truly unbreakable, but the stunt did not go as planned. The window broke, resulting in a cascade of glass when the ball was overarmed into it. Repeating the stunt led to yet another broken window. The glass still repelled the ball and the ball didn’t go through the windows. Elon recovered smartly from the setback saying that they would tackle the issue in post production.

Musk reacted by saying that the glass had remained intact when the Tesla team had thrown wrenches, and even literally threw a kitchen sink, but had broken at the launch ceremony.

Tesla’s Cybertruck has a starting proce of USD 39,900, and is loosely inspired by “Lotus Esprit S1” from the Bond film “The Spy Who Loved Me”. At the retail level, the truck is available in three versions –
with 250 miles, 300 miles and 500 miles of range, respectively.

With the launch of the Cybertruck, Tesla is seeking to compete with the Ford F-150, which has been identified as the top-selling pickup truck in the US for over 40 years, and the Chevrolet Silverado from GM. Currently, the pickup trucks segment is the fastest growing segment in the US.

Prior to the stunt with the glass window, another executive had already used a sledgehammer against the side of the truck, and though he struck the vehicle multiple times, there was not even a scratch on the truck. Musk claimed that in rehearsal, the iron ball had not caused any damage to the windows.

The “Cybertruck,” an all-electric pickup is Tesla’s sixth vehicle since the company was set up in 2003.