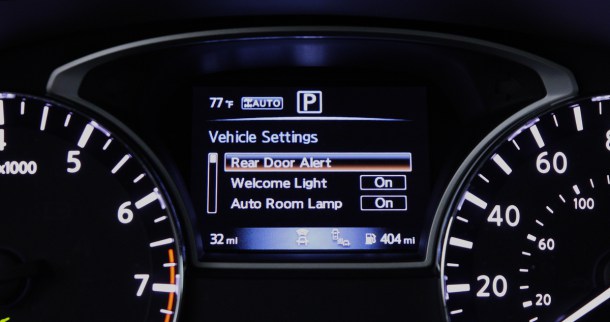 Nissan will be debuting a Rear Door Alert as a safety feature on the 2018 Pathfinder SUV that will prevent motorists from accidentally leaving groceries, pets or children in their back seats on hot days. Though it is similar to the Rear Seat Reminder that General Motors had introduced in the 2017 Acadia and then rolled out to the rest of its range, Nissan claims this feature is an industry first.

The Japanese auto manufacturer says that the feature was developed by two female engineers, Elsa Foley and Marlene Mendoza who came up with the idea after Mendoza accidentally left a pan of lasagna in her car. For days afterwards, her vehicle smelled of pasta and the two engineers began working on the rear Door Alert.

While GM’s Reminder just issues a dashboard alert and faint chimes, Nissan’s feature serves as a more powerful reminder. It comprises monitors on the back doors switches that detect their open/closed status before and after a trip. If the car’s system senses that a back door was opened or closed prior to a trip, but was not re-opened again after the trip ended, the vehicle responds with a series of notifications after engine shutoff including a series of unique honks.

Mendoza said, “The idea is if you open a rear door, whether to put a child or a package in the rear seat, the vehicle will help alert you when you get to your destination that you may want to check the rear seat. She said that if motorists do not open the rear seat again, the feature will make them think about what they might have put in the back seat.

The feature will be launched in the Pathfinder in September, and hopefully just like GM did, Nissan will add it in more of its models to increase the safety of children and pets in the summer.