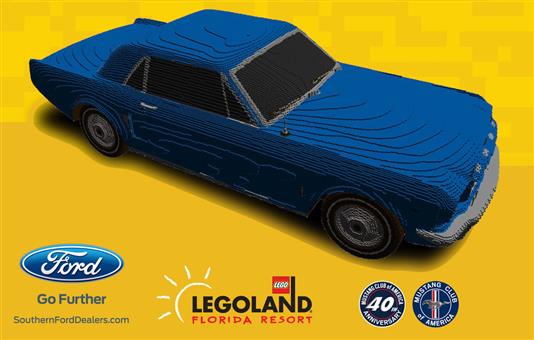 There are very few children who have not grown up playing with LEGO blocks. In a tribute to the ever popular Mustang, the LEGOLAND resort in Florida will be showcasing a life size replica of the popular Ford model.

LEGOLAND is every kids and possibly adult’s dream come true and bills itself as the ultimate LEGO destination for kids in the age group 2-12. The 1:1 replica of a “19641/2” Mustang coupe will be held as part of the 40th anniversary celebration of the Mustang Club of America.

The model will be built brick by brick at the LEGO Group’s headquarters in the United States in Enfield, Connecticut and will be officially unveiled to the public at the renowned Indianapolis Motor Speedway on Thursday, Sept. 1.Made by hand from thousands of colorful LEGO bricks by a highly experienced team of Master Model Builders, the model will recreate the pony car, which debuted at the New York World’s Fair in 1964, down to the tiniest detail.

Chloe Boehm, a PR executive at the LEGOLAND Florida Resort said that the Indianpolis Motor Speedway will serve as the perfect location to debut LEGO’s take on a car that in its time, redefined the concept of cool in a fun, creative way.

The resort collaborated with its long-time sponsor Southern Ford Dealers to build the life size Mustang that is sure to appeal to visitors belonging to all age groups.

Speaking about the model, Jeff Mays, president, Mustang Club of America said that both the Ford Mustang and LEGO toys are classic American icons that have a universal appeal.

The model will be part of MCA’s Mustang Parade at Indianapolis Motor Speedway on Friday, Sept. 2. The event will also feature Mustangs and MCA clubs from across the globe in an attempt to break the record for the world’s longest Ford Mustang parade.

After its debut, the LEGO® Mustang will make several stops around the country before becoming part of the permanent display at the Ford Driving School attraction at LEGOLAND Florida Resort.