Home News Automotive Ford to Work with GE Healthcare to Make 50,000 Ventilators in Michigan in Next 100 Days 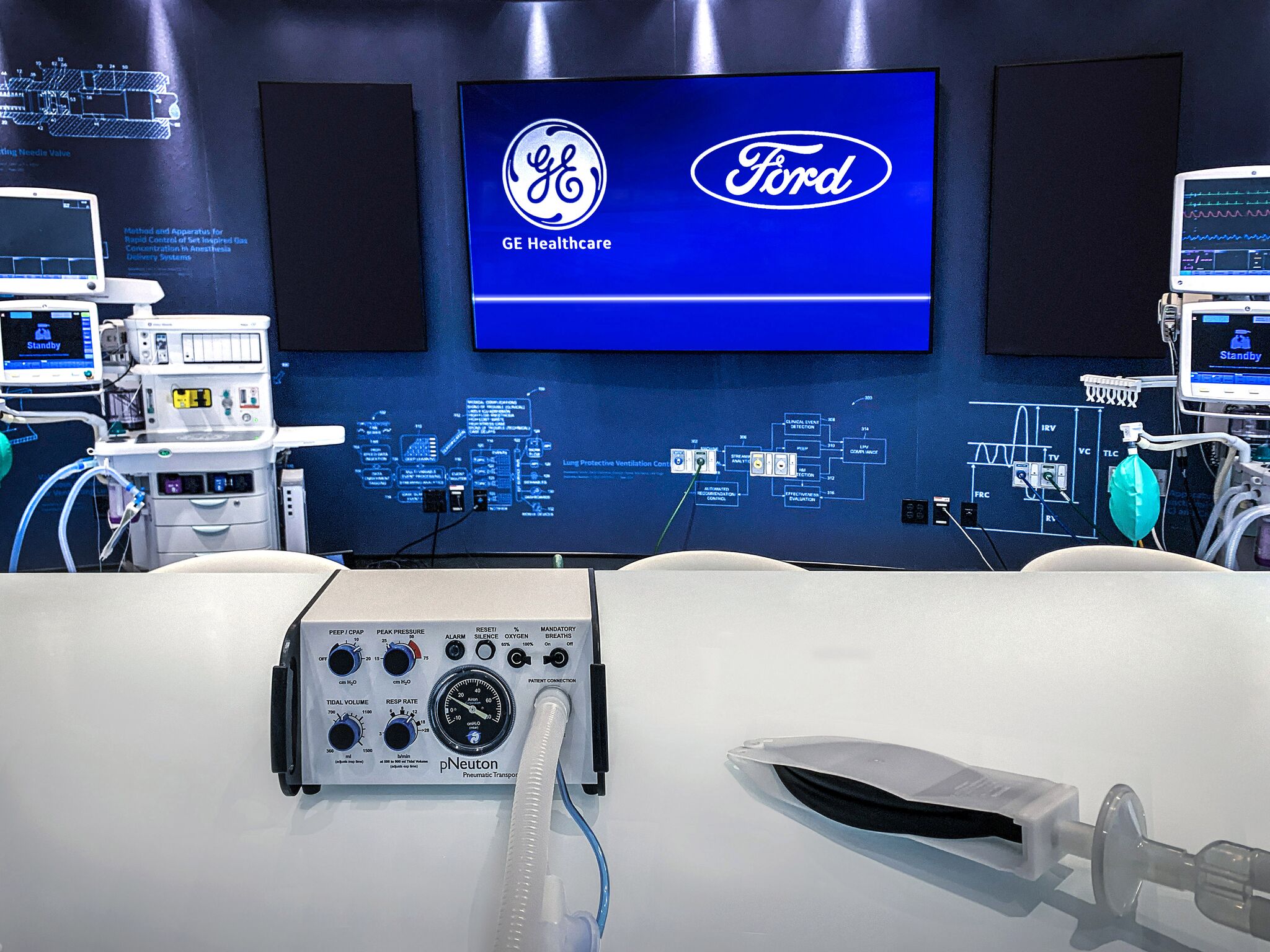 Ford to Work with GE Healthcare to Make 50,000 Ventilators in Michigan in Next 100 Days

Ford Motor Company has announced that it would work with GE Healthcare to Manufacture 50,000 ventilators on a war footing within the next 100 days. With the coronavirus spreading at a rapid rate in the United States, it is expected that there would be immense shortage of essential medical supplies like ventilators, masks and gloves. The two companies would join hands to make a third-party ventilator. The stated objective of the project is to make 50,000 ventilators within a period of 100 days and make 30,000 respirators every month on an as needed basis.

The team in charge of the project will use Ford’s manufacturing facilities to scale up production, and while GE Healthcare will provide its clinical expertise and will deal with licensing the current ventilator design from Airon Corp.. Airon is a small, privately held company that specializes in the production of high-tech pneumatic life support products. GE Healthcare acquired Airon Corp’s design and brought it to Ford’s attention as part of its efforts to increase the production of ventilators to help healthcare professionals treat COVID-19 patients.

The GE/Airon Model A-E ventilator has a design that leverages air pressure for its operation and does not need electricity, making it suitable for use in most settings. Its design is simple enough to quickly scale up production and cater to the growing need for such devices.

Jim Hackett, Ford’s president and CEO said that the healthcare teams of both companies have worked creatively and tirelessly, to come up with a way to make this vitally needed ventilator quickly and in meaningful numbers. He said, “By producing this ventilator in Michigan, in strong partnership with the UAW, we can help health care workers save lives, and that’s our No. 1 priority.”

This is not the first time that Ford has helped out in the event of a national emergency. In the last century, during the second world war, Ford had seamlessly used its manufacturing capabilities to switch from the production of cars to make military tanks which were used on the battlefield. Similarly, the Ford team is now working with GE Healthcare to use its engineering and manufacturing expertise to voluntarily help the US resolve one of its most pressing problems.

Ford plans to first send a team to work with Airon to increase production in Florida, and will start production of ventilators at its Rawsonville Components Plant in Ypsilanti, Mich.by the week of April 20.

“From the days of Rosie the Riveter, UAW members have stepped up during difficult times in

this nation’s history for the good of us all,” said UAW International President Rory Gamble.

“Today’s announcement by Ford that UAW employees will make ventilators at Rawsonville is in that tradition. We are working very closely with Ford to make sure that all CDC guidelines are followed and that we are exercising an abundance of caution inside the plant. Ford and our UAW Ford members should be commended for stepping up in these very uncertain times.”

The Airon-licensed Model A-E ventilator is the second such Ford-GE Healthcare ventilator collaboration. The two companies are also working on a separate effort to produce a simplified ventilator design from GE Healthcare. They have already increased production of the R19 Ventilator and it is expected that the combined ventilator supply from both projects will help significantly to meet the increase in demand for ventilators around the US in the fight against COVID-19.

GE Healthcare President and CEO Kieran Murphy lauded Ford for its efforts to lend its manufacturing capabilities to help quickly scale the Airon-licensed Model A-E ventilator and help equip clinicians in the fight against COVID-19.

Murphy said. “Our deep understanding of the health care industry with Ford’s supply chain and production expertise will help meet the unprecedented demand for medical equipment. We continue to be encouraged by how quickly companies are coming together in innovative ways to address this collective challenge.”

GE Heathcare and Ford had consulted with medical experts to ensure that the Airon-licensed Model A-E ventilator is suitable for treatment of COVID-19 patients with respiratory failure or difficulty breathing. The ventilator has been designed specifically to facilitate quick installation, so that it is easy for healthcare workers to use and can be deployed in an emergency room setting, during special procedures or in an intensive care unit.