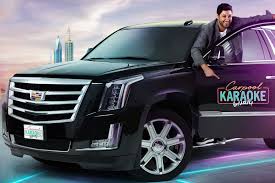 Cadillac will Power Carpool Karaoke Arabia in the Middle East

Cadillac has partnered with Dubai TV to help air Carpool Karaoke Arabia which will feature renowned Middle East stars with the brand’s luxury flagship SUV – the Escalade as the backdrop.

In collaboration with Dubai TV, one of Dubai Media Incorporated’s TV channels, Cadillac Middle East is showcasing the brand’s definition of spacious luxury driving with a Cadillac Escalade, which will be used as the stage to host the show’s exclusive guests. First linked to US-based Car Karaoke: The Series, Cadillac has leveraged the opportunity to bring together Cadillac vehicles and the pop culture content for the last few years.

From 2015, when Cadillac moved base to New York, it has increased its focus on art and culture. Cadillac is now seeking to engage with younger generations through partnering with events and programs related to art, fashion, travel and entertainment. Hence, Carpool Karaoke Arabiai will serve as the ideal platform for Cadillac to communicate with fans in the region.

Nadim Ghrayeb, Head of Marketing, Cadillac Middle East said that Cadillac has always been an icon when it comes to fashion, travel and entertainment and the brand is now leveraging this reputation both globally and in the Middle East. This is why Cadillac is now collaborating and co-creating with local talent and organizations from across the Middle East. Carpool Karaoke Arabia is of high interest to Cadillac’s target audience.”

Sarah Al German, General Manager of TV channels at Dubai Media Incorporated (DMI), said that the company’s partnership with Cadillac would enable it to produce Carpool Karaoke Arabia, which is an innovative program both in terms of content and style. She went on to express her confidence that show would prove to be a hit with the viewers, based on the success of the original CarPool Karaoke format. The original Carpool Karoake program has achieved record levels of viewers worldwide and attracted superstars like Adele, Ed Sheeran, Madonna, Lady Gaga, Jennifer Lopez, Justin Bieber and many others.

“At Dubai TV, we have a broad marketing plan for CarPool Karaoke Arabia including advertising on roadside billboards, mall promotions and digital campaigns, complemented by public activations and competitions throughout the duration of the show across Dubai TV’s social media platforms,” Al German added.

The original Carpool Karaoke turned out to be a viral sensation and was a program that made an impact across the globe with the most popular episode boasting 177 million views. The Middle East version, which is currently airing on Dubai TV, will have Hisham Al-Hwish, former Star Academy winner, as the host. He will accompany some of the most well known stars and celebrities from the Arab World, in a Cadillac Escalade, while taking them on a scenic tour of Dubai.

Each episode of the show will focus on a star’s artistic successes. Singers will perform a medley of their greatest hits while those who are not known for their singing will bring a playlist of their favorite songs and their choices will serve as topics of their conversation with Al-Hwish.