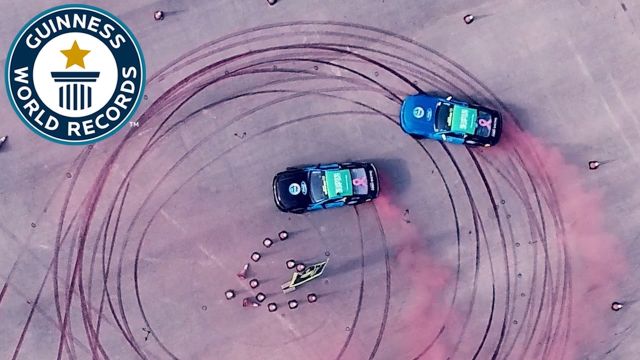 It is no easy task to be featured in the Guinness Book of World Records. To break the record for being the biggest, smallest, fastest, slowest, longest in any particular category in the whole world takes a special kind of focus that only truly dedicated people have. A record that makes it to the Guinness Book of World Records should be one that is measurable, is standardizable and can be broken by others. The attempt to break the record must be made in the presence of officials from the publication and it should be verifiable.

Hence, it is noteworthy that the automotive world does not lag behind when it comes to the Guinness Book of World Records, especially when it comes to truly worthy causes. Last December, Al Jazirah Ford Racing and Al Jazirah Vehicles Agencies teamed up to create a world record that aimed to spread greater awareness about breast cancer.

Stunt drivers Abdulhadi Al-Qahtania and Muath El-Essa used drift cars in a haze of pink smoke to break the record for the world’s largest tire mark. They created the image which covered 883.98 square meters in the shape of a pink ribbon to signify breast cancer awareness outside a car warehouse in Riyadh, Saudi Arabia. They needed to cover an area of 500 square meters to break the record and they broke it by a significant margin.

The importance of early screening to detect and minimize fatalities due to breast cancer cannot be emphasized enough. This stunt certainly served to spread greater awareness about the need for regular screening and to give drifting a more positive image. Guinness World Records adjudicator Alan Pixsley was on hand to confirm the new record and present an official certificate.